In these series, we detail how the Covid restrictions and the trend to work from home, have but amplified our natural propensity to explore Morocco. After all, it's about trails. And sun.

Part 1: The desert, the water and the djinnoun. 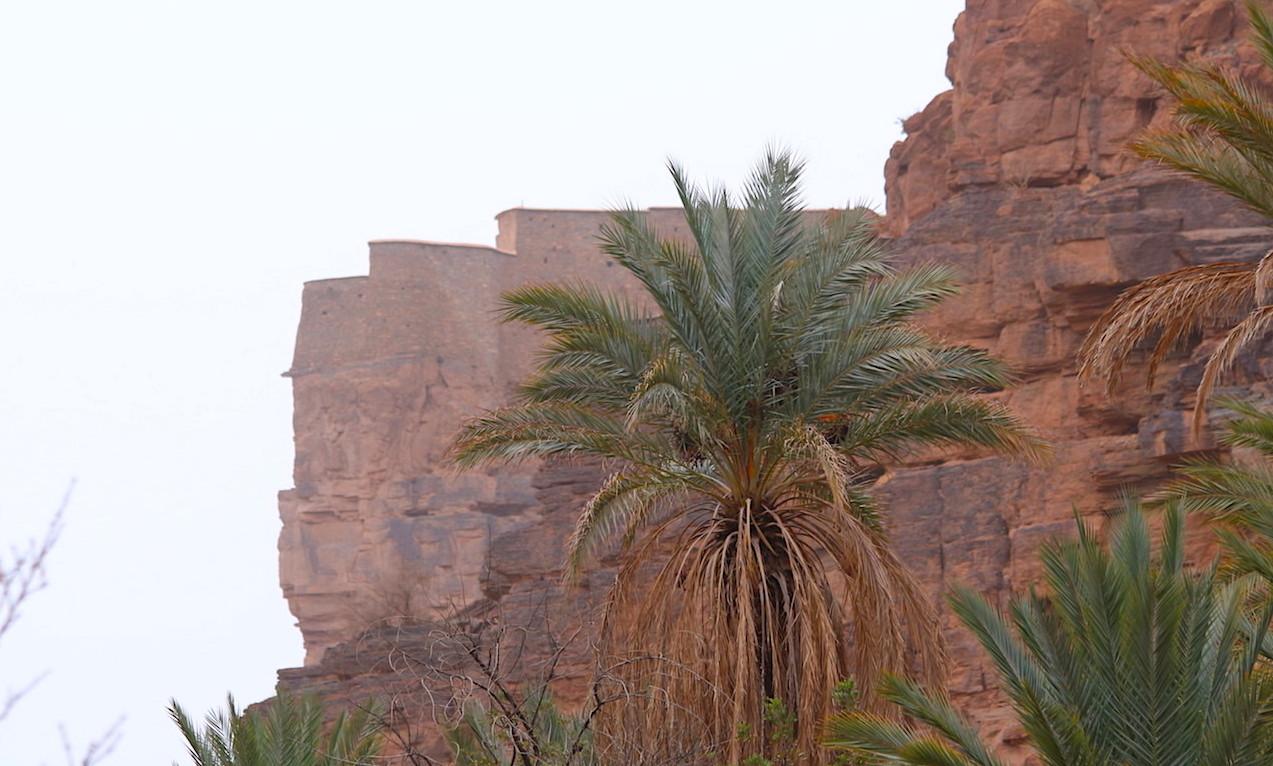 Water diviners. Overhanging fortresses. Gold diggers. Sculpted boulders, wells in the desert, trees sprouting out of rock. Treasure hunters, tears of lava - is this how legends are pieced together ? I am told of an aged man fetched all the way in Tiznit, treading these hollows holding olive tree twigs. When water is nigh, leaves flutter. At least, in his hands they do. Yet, it appears the olive tree is not absolutely necessary; a youngster from a nearby village bears the gift of 'hearing' the underground sources. The spell is cast, yet my more rational side pulls me back to the immediate reality. Hassan, my local guide, is quite the story teller, but I start wondering if he's not making things up as we trail along. 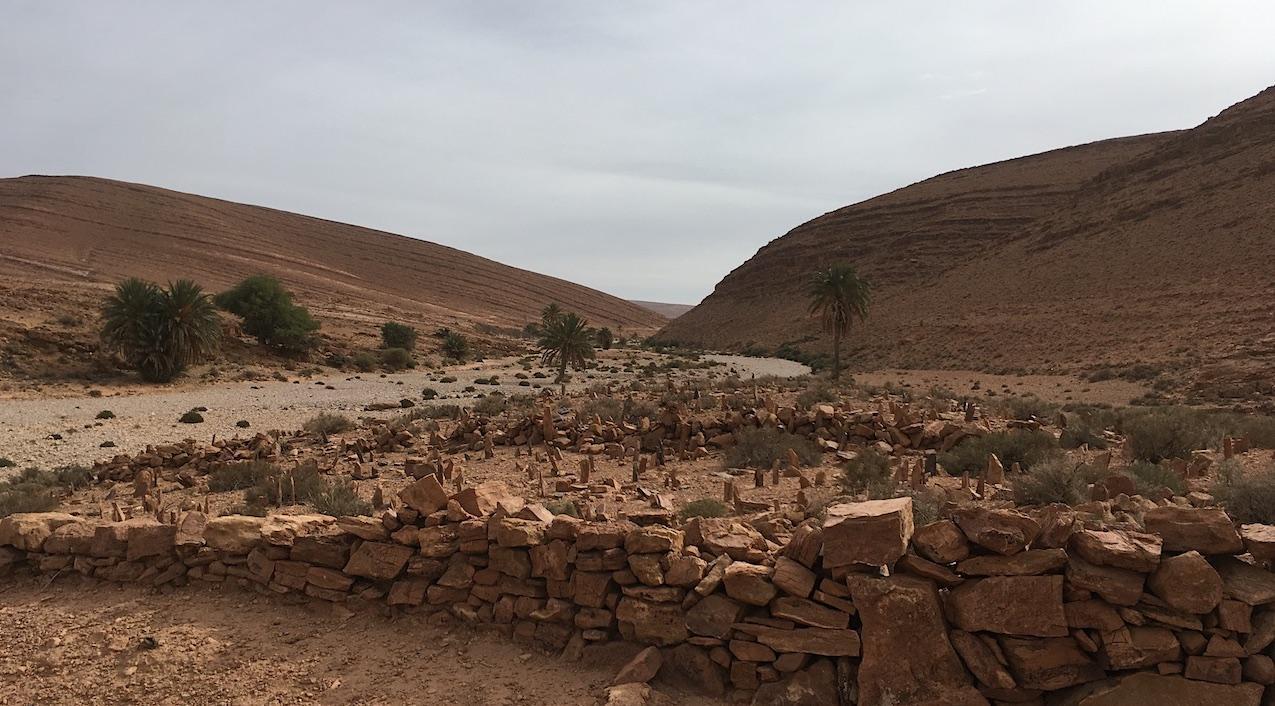 In this barren immensity, rolling brows and crags of rock dotted by tufts and shrubs, one has to possess a sharp eye. Discern intention. Nature or man. A heap of stones or a an ancient burial chamber ? Rocks piled up on top of each other, erosion's natural outcome ? Or a shepherd’s den ? A vantage point ? Mountain tops or village fortresses ? Without doubt, the too many hours spent in front of a screen don't give me an edge.

I have taken up a two day trek in the Anti Atlas mountains and our departure point this morning was somewhere south of Tafraoute. The ruined village we leave behind is said to have fostered a Jewish community. Hassan points out the marks of someone's recent excavations, testimony to the local myth of treasure hunters. If there's smoke, there is fire... Later, I hear about some which did strike it lucky. 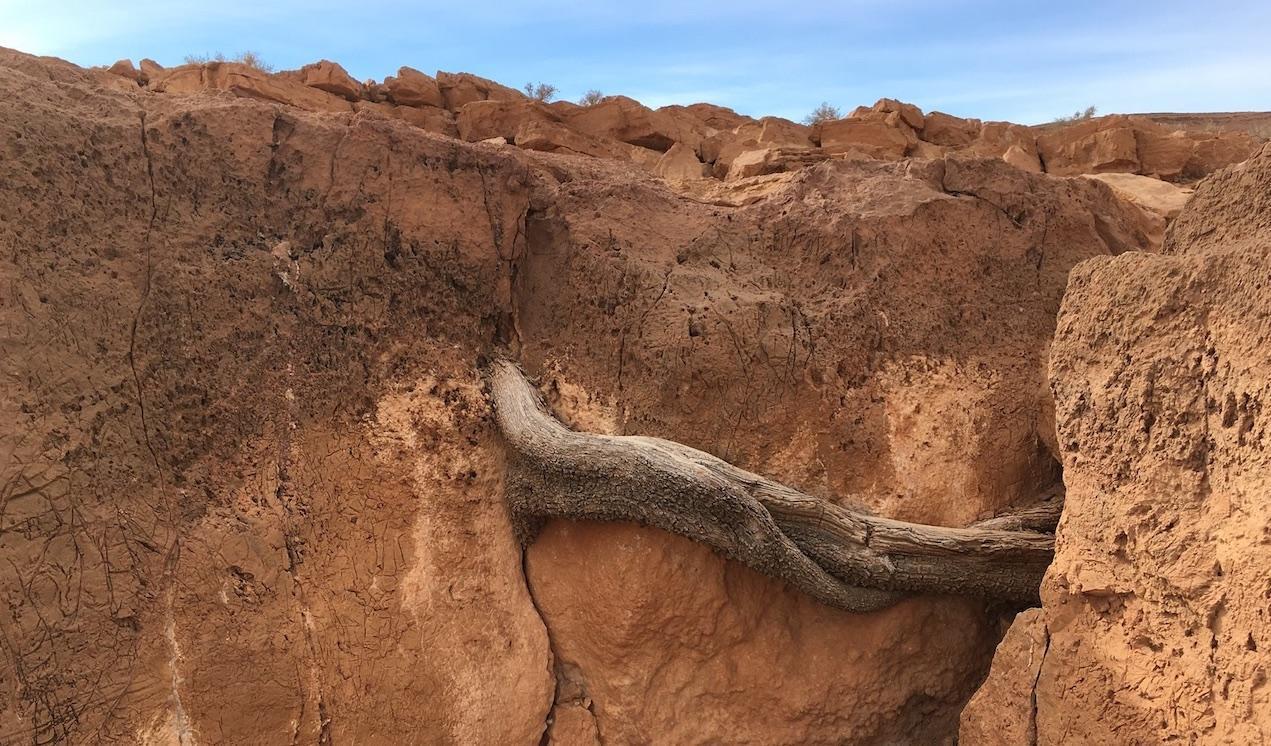 Despite the appearance of a rubble desert, not one hour goes by that we don't cross another soul, mostly nomads, going about their business, which is taking their camels and goats to the next pasture land. And what can grow in the desert ? While crossing a gully, I stumble upon a giant snake burrowed in the rocks. It turns out to be the root of an argan tree. How could it make its way across, or rather through, it's beyond my comprehension. Later in the day, sundry colours grace the stones around us, from the ubiquitous beige and dark grey to burgundy and even turquoise. 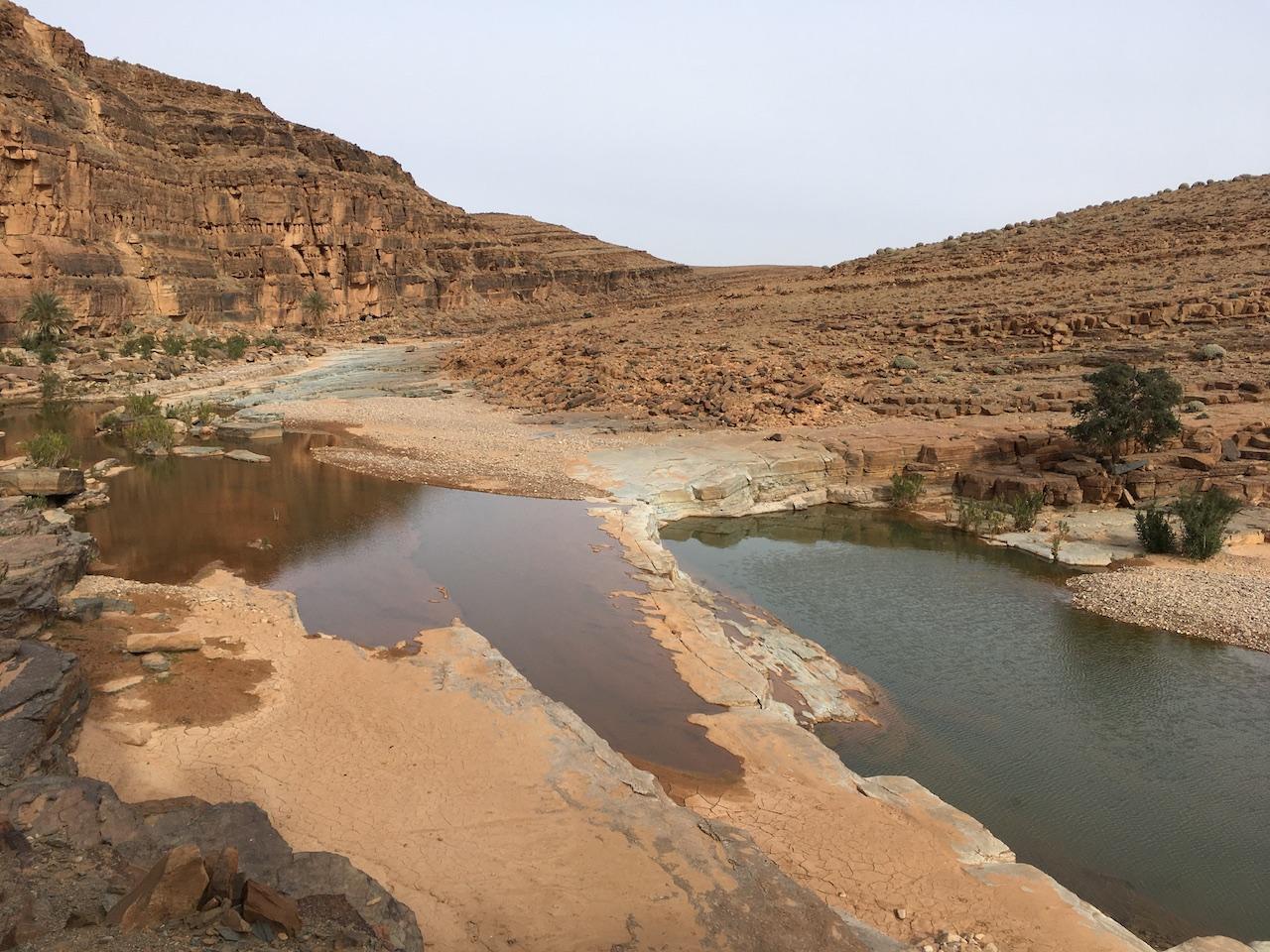 Ancient rock engravings etched on canyon's wall portray goats and bovines. At least that's what I make out. Nearby, the water surfaces, creating natural pools deep enough to bathe in, the gueltas. Bordering them, a 30 feet horizontal slab gave birth to most peculiar rock shapes, like horizontal and parallel rows of miniature sarcophagi stacked one next to each other. At night, my guide relates, it becomes the ideal spot to spy on wild animals , gazelles, rabbits or foxes looking to quench their thirst. 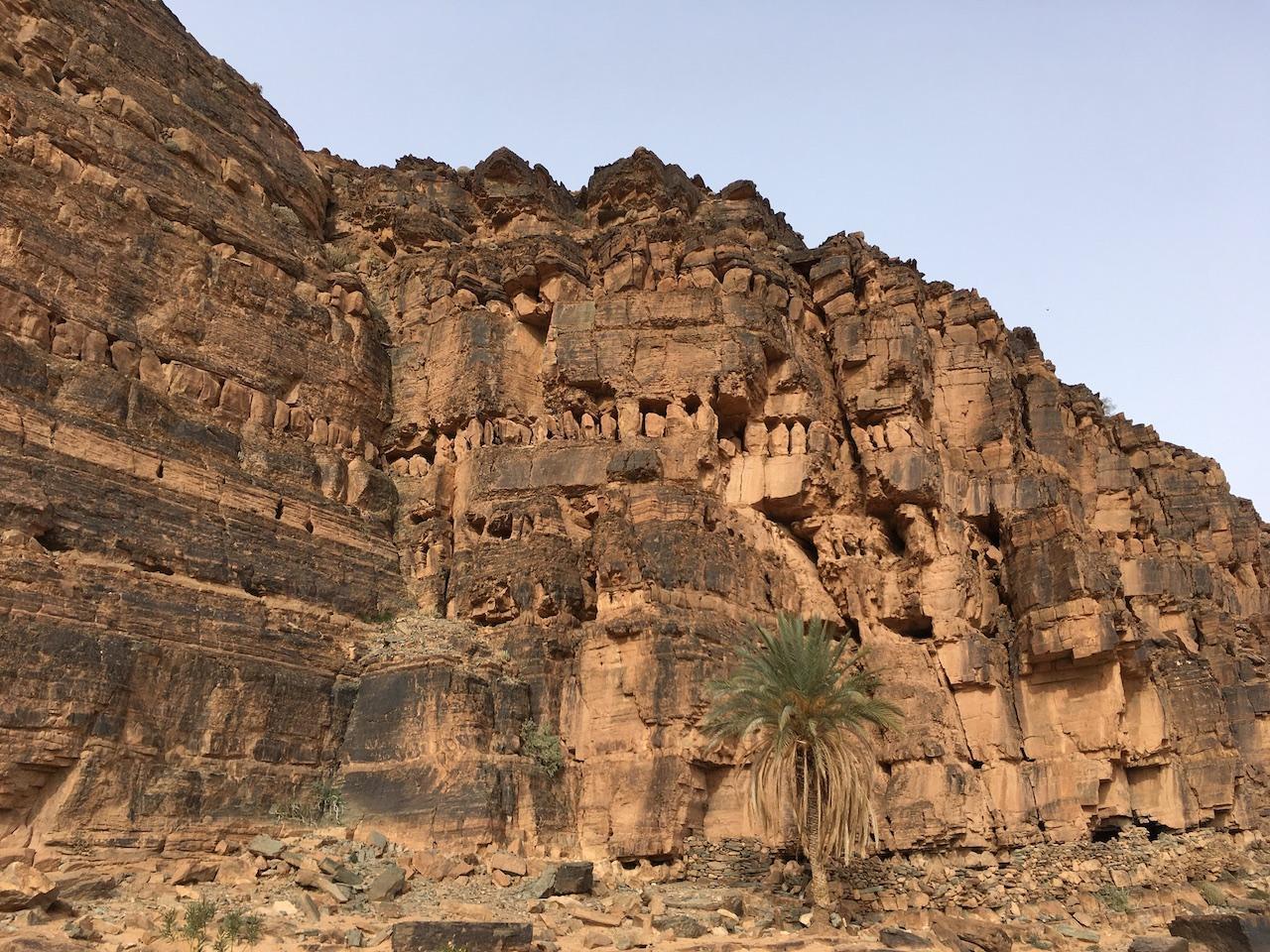 Late afternoon, we descend onto dramatic canyons, the gigantic slab walls ominous, humbling, their protruding jabs almost menacing. At the bottom of the gorge, we pause and drink straight from the source, rewarded, grateful. The lava caught in time on the side of the canyon, is redolent of wax dripping on candles, silent testimony that at some point in time, year ago ( thousands, millions ?) a volcano spilled over. As the night falls, the call of the muezzin resonates through the valley, a mundane reminder that the supernatural reins. 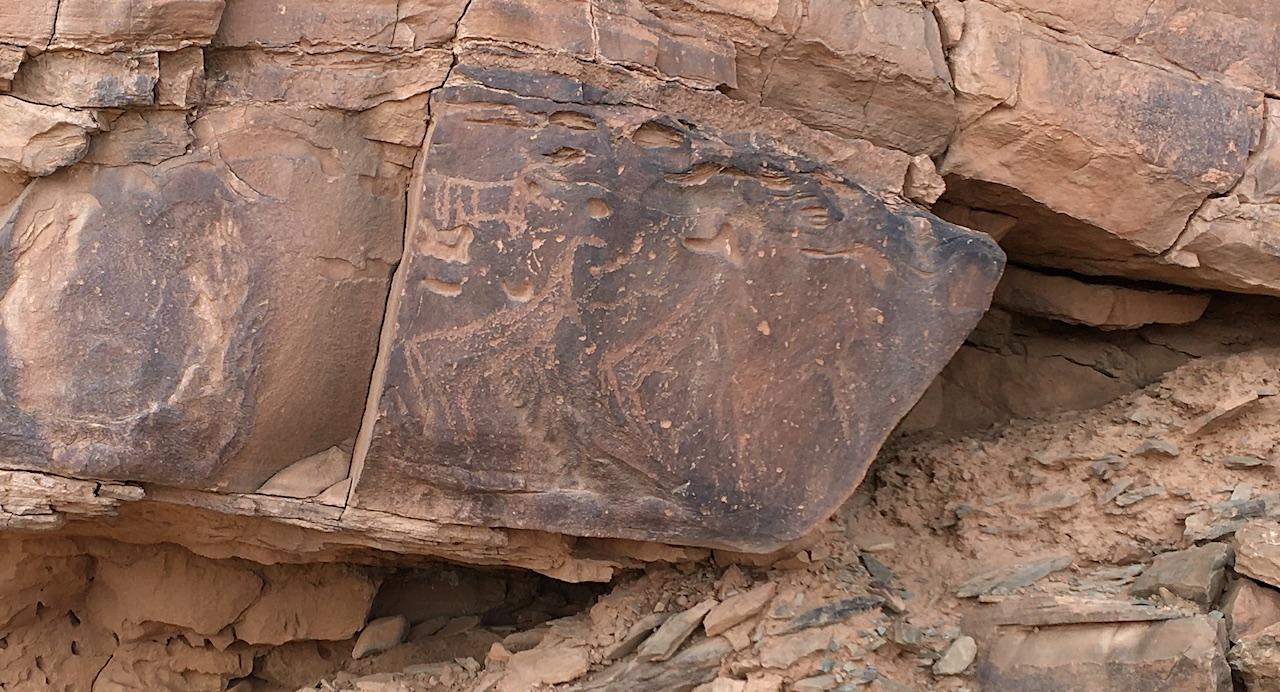 Next day, I wake up refreshed after my first night in a real bed in a few days. If my legs seem to have recovered from the 9 hours of walking of the previous day, my feet not quite so: I feel blisters shaping up, double- layer socks or not. Yet, who can fret about such trifles when the sun already bathes the valley with its rays ? The girls are preparing for school and giggle around the house, while Hassan is busy performing his morning prayers. Before long, the breakfast is ready and we're feasting on pancakes draped in honey and coffee, a once a day exception for my guide who is otherwise addicted to atay, like any other Moroccan. After breakfast, I saunter around the village alleys and muse about the distance both literally and not so, between here and the world out there, quelled by an invisible, yet ravaging pandemic. 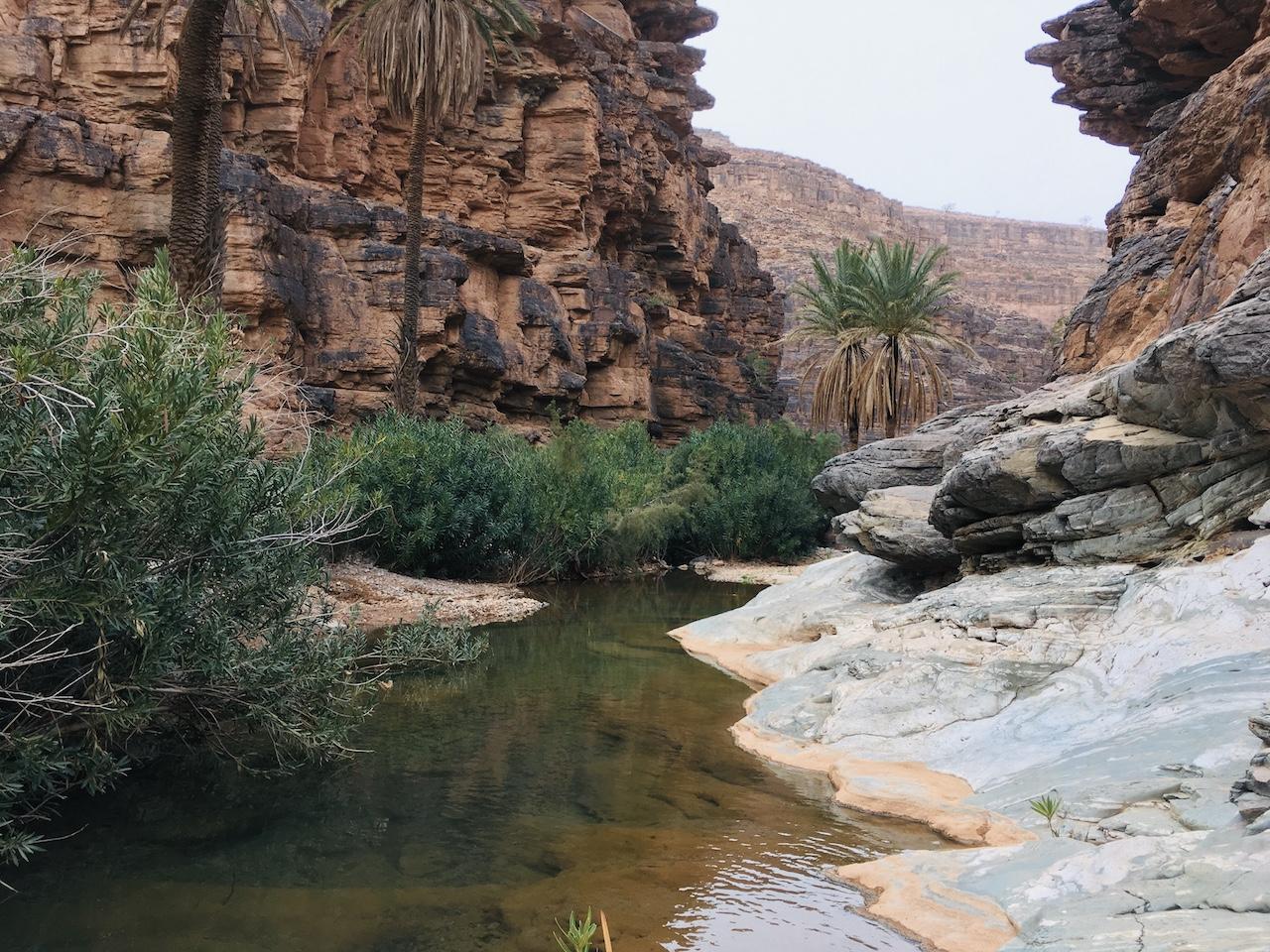 With only 5 hours of walking ahead of us, we allow ourselves a late morning. Later, we climb north and leave the village behind. To my left, I wave a silent goodbye to the granary, the stately guardian of the valley. Soon, we are aspirated back into the immensity and desolation of the rubble desert. 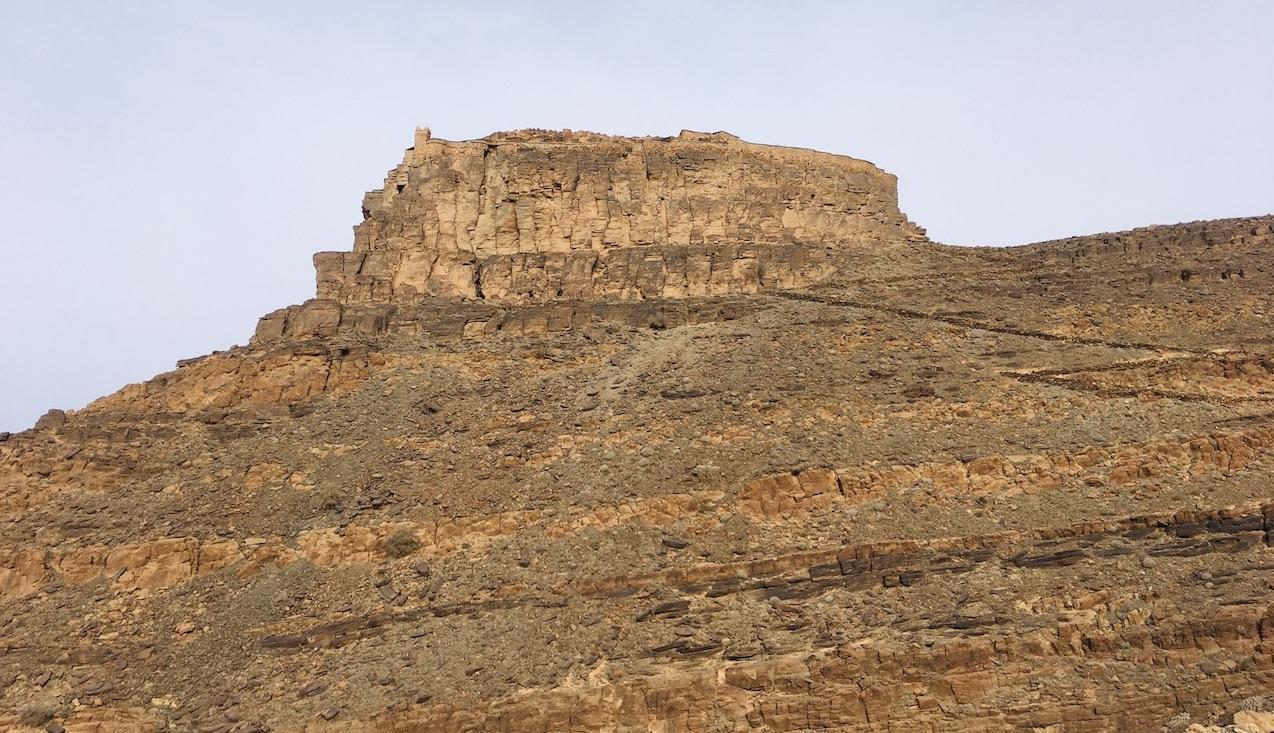 Beyond the next brow, lies a cave. A cave large enough to live in, my guide insists. In principle, grottoes are for animals when rain falls over, while the nomads shelter under their tents, waterproofed by plastic layers. Wouldn't you protect first your most precious goods ? Unless, it is that kind of cave... For the ones that come at night. The ones that can not be seen. The djinnoun. Mentioned in the Qor'an, the spirits, still hold a special place in the collective imaginary of the Berbers. Traditionally, they are believed sometimes to dwell in caves and it used to be a local wont to leave offerings for them ( grains or other edible goods) at the mouth of certain such caves, to appease and propitiate them, a practice somewhat still heathen to the more orthodox Islam. Gradually, we settle into a mute mechanic trudge. The repeated pattern. Oued, brow, oued, brow. How can one explain what oued is ? Not a river, rather an intermittent stream, whose flow relies on rain and the water table. 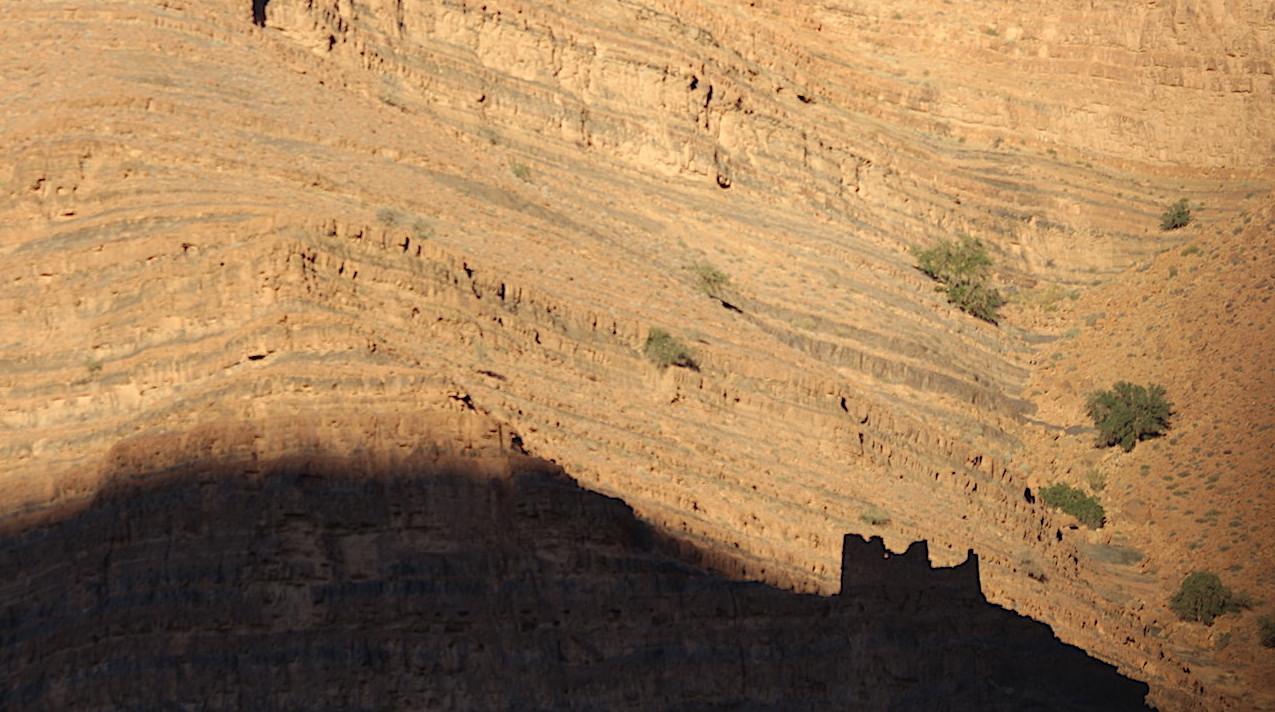 Today will be completely distinct from yesterday. From 11 AM until 5 PM when we finally arrive at our destination, the only living soul we cross is a wild rabbit. The silence and the humdrum trek are only punctuated by my guide's remarks. Here, he points out how traces of wild animals, rabbits, gazelles, coyotes, and how they converge on the same trail to mean that water is not far. There, he motions me to glimpse in the distance to a chink in the thicket of piled- up slabs; what I thought was a tiny cave turns out to be a well, furnished with a string and bottle, so that any itinerant can help himself to drinking water. Where two dry bed rivers meet, a cemetery lies, its pointed slabs jutting out skywards. A nomad cemetery, by all evidence, as no traces of a hamlet or den litters the site. Hassan lifts his two palms towards the sky and from his whispers comes out a hushed litany to honour the dead. 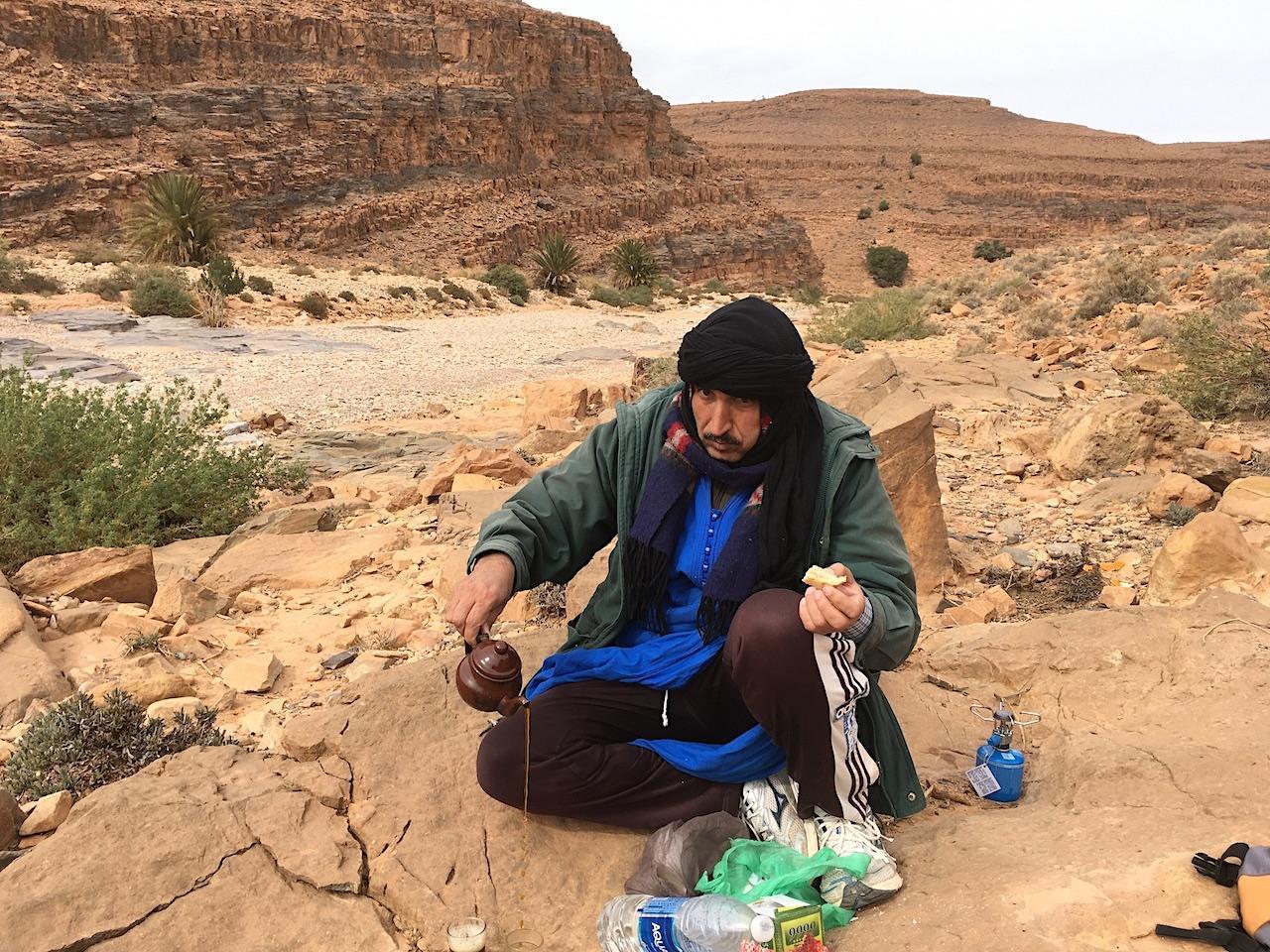 Later, we stop for lunch. My guide offers canned sardines. I offer half a pack of camembert cheese and we end up spreading it on the freshly baked bread that we fetched with us from the village. Moments later, atay is poured and our occasional sluices is the only thing disturbing the monumental, almost baleful silence. I wouldn't trade this moment for the best restaurant in Bordeaux. Instead of itching to check my phone for instant gratification, I feel gratified when the No Service mention shows up. Has anyone picnicked here before ? On the same spot ? Treaded in the same steps ? Boulders abraded by sun and wind, has anything else brushed against you ? 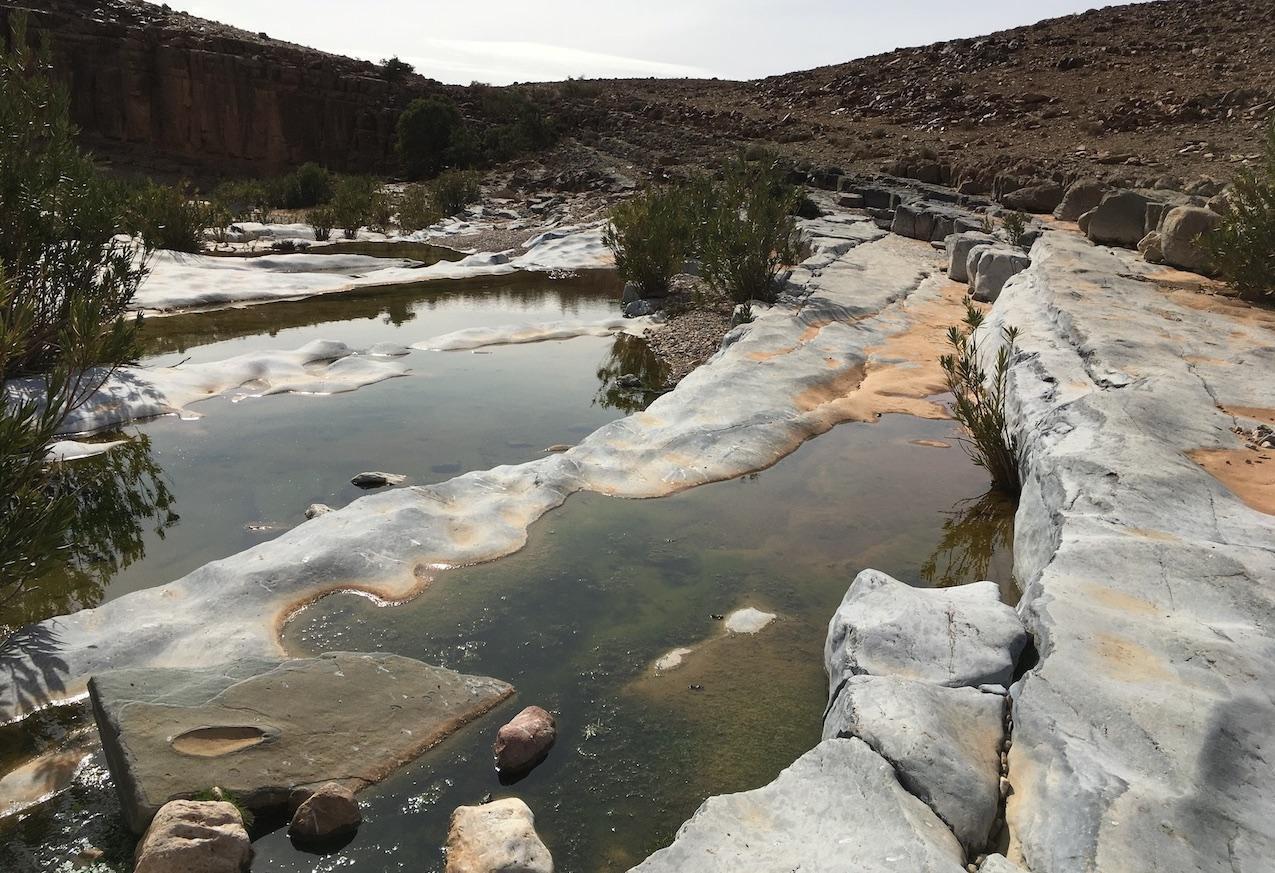 Everything surrounding us makes it unlikely. For there is no trail or signs to speak of. I'm relying on Hassan's experience and intuition and my compass that tells me we've been headed NNE all morning. But does it matter ? As long as we're not walking in circles, I'm happy to press on. At the end of the afternoon, when I'm tiptoeing around trying not to step on my soon- matured blisters, I realize how fortunate I am, to be able to glimpse into, dip my toe into other ways of living and feel, if only for a few days, immensely grateful. For in less is more, what is really less ? And what is really more ?

More in this category: « Tafraoute - a wonder away from tourist trails Trekking in Morocco 15 things to know »
back to top