Riad Laaroussa, our guests’ favorite riad in Fes- the interview.

I first passed the doorstep of Riad Laaroussa in 2013 on the occasion of Fes World Sacred Music Festival. I immediately felt compelled by the proportions and objects. The ground floor rooms had 7 meter high ceilings. And the courtyard could have accommodated a generous pool but the owner decided to maintain its fountain and its citrus gardens. Soon after that visit, we sent our first guests there as Fes was part of their 7 day travel around Morocco. And over the years, the feedback of our guests only got more and more positive. When I meet them at their riad at the end of their private tour of Morocco to talk about their trip, more often than not, they rate their stay at Riad Laaroussa as the best throughout their tour. So then, what is that makes Riad Laaroussa unique ? For me, it goes beyond things you can touch. It’s ultimately the staff. Although Moroccan hospitality and charm is almost a given when staying in a riad in Morocco, the personnel here feel like they’re all a big family. And most of them have been around since the opening. The owners, Fred ( French) and Cathy ( American), have decided from the beginning to do things differently. How so ? Well, that’s what we came to Fes to find out. It was a chilly day in March and spring seemed to have second thoughts. So Leila and I sat down with Fred and had a chat about it. 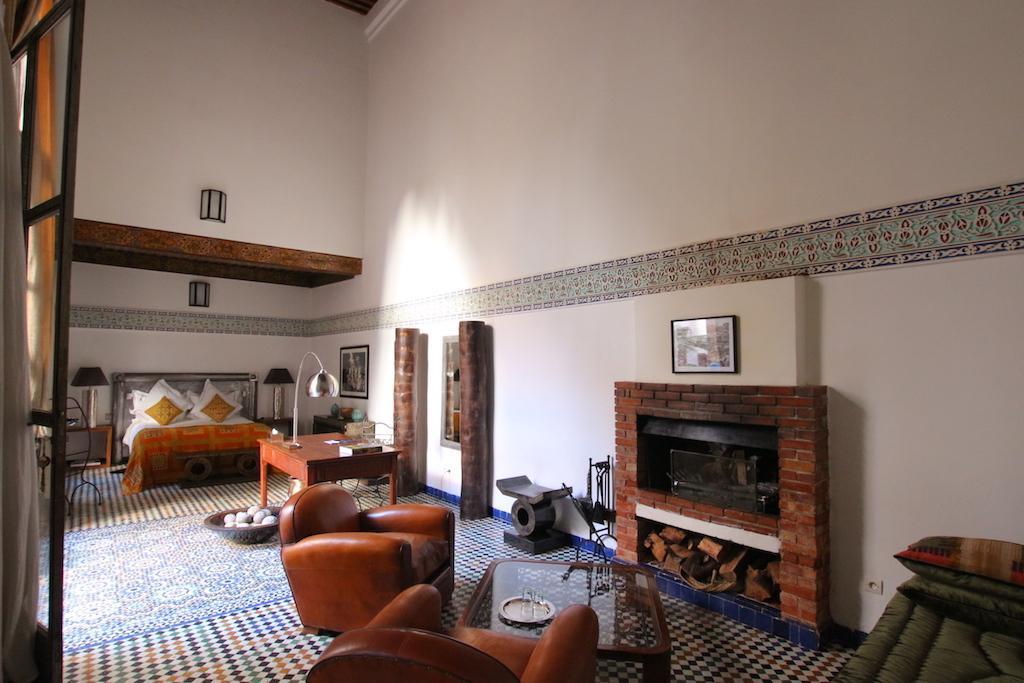 Sun Trails: When did you open the Riad and how did that come about ?
Fred: In 2003 I visited Fes with my father and I fell in love with the old town. I had hired a local guide and when he showed me inside some of the old palaces of Fes, I was smitten. At that point, I had no idea that I would some day buy an old house, open a hotel and so on. But it was then that the seed started to grow and some months later I got back and thought of purchasing an old house and renovate it, but without any commercial use in mind.

ST: But had you visited another city in Morocco by then ?
F: I was born in Casablanca and know pretty well Morocco. I had visited also Marrakech many times, but although I love Marrakech for a thousand reasons, I never had this coup de coeur that I felt in Fes. In Fes, I had fallen for this medieval ambiance that somehow connected with me and I felt something that I can’t retrieve in the modern world. 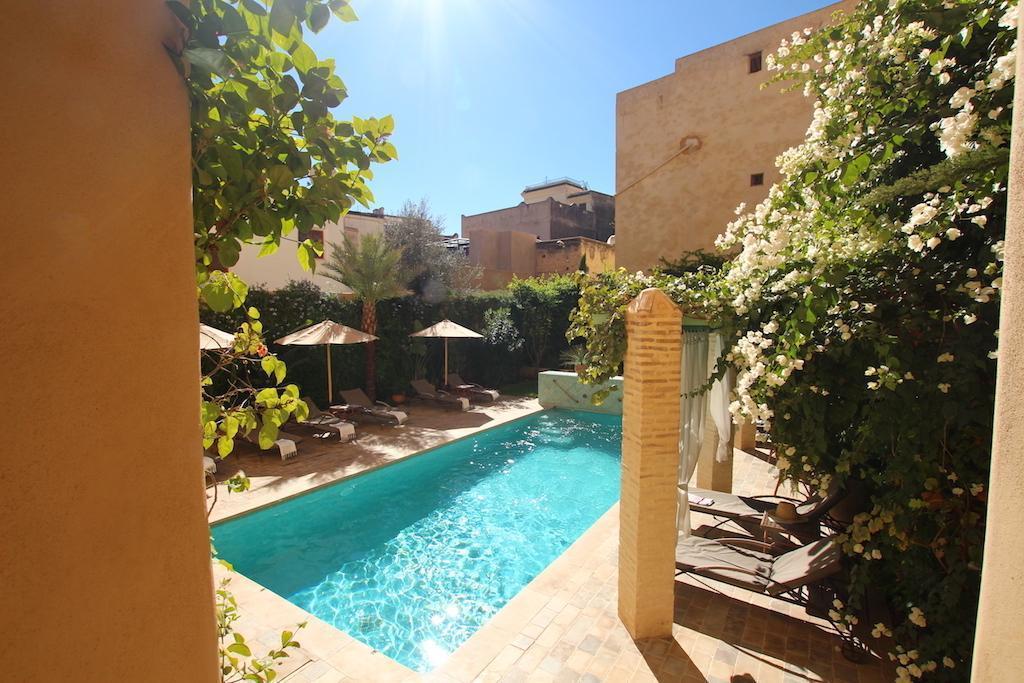 ST: Perhaps also because Fes is really the only medina in Morocco where one travels in time.
F: Indeed, and even after 15 years, when I walk down the streets with my children, that magic still operates.

ST: So you bought an old house. How did you think of making a riad out of it?
F: Well, in the beginning, we just had a few parties and a good time. But after a while, I found myself with a big house on my hands, most of the time empty. There were already a few riads open in Fes. So I thought, why not open a guest house ? And so I started renovating the house so as to be able to welcome guests. I thought I was going to hire a manager, but every time I returned to see how works were progressing, I was sad to leave. I was 40 and thought it’s perhaps the right moment to change my life around. 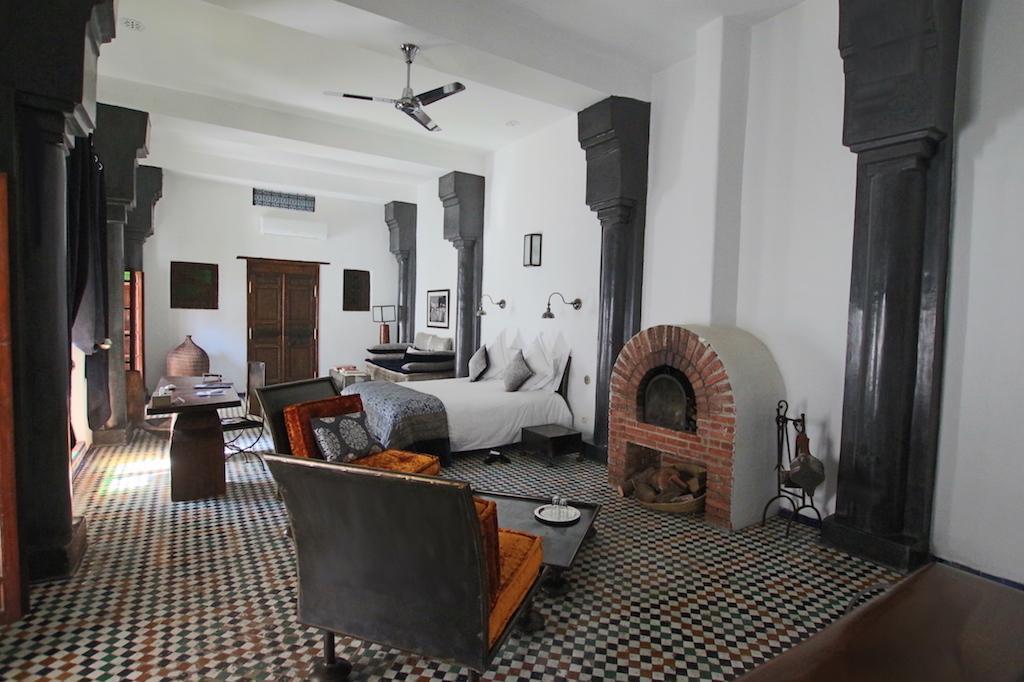 ST: What was the house before ?
F: A family house left abandoned. Only 2 old sisters lived in one of the rooms downstairs.
The last proprietor were merchants in hlyia ( a Moroccan delicacy made of salty preserved meat ). The present kitchen is where they used to slaughter the animals and turn the meat into hlyia. The house itself dates back to at least 17th century. We’ve done a few researches and found some documents. We know also for example that by the beginning of 19th century it was left in ruin and bought by a rich merchant that restored it. It was also a koranic school at some point in time. Every other year, there’s an old man knocking at the door and taking a visit. He reminisces of how he grew up in this or that particular room. 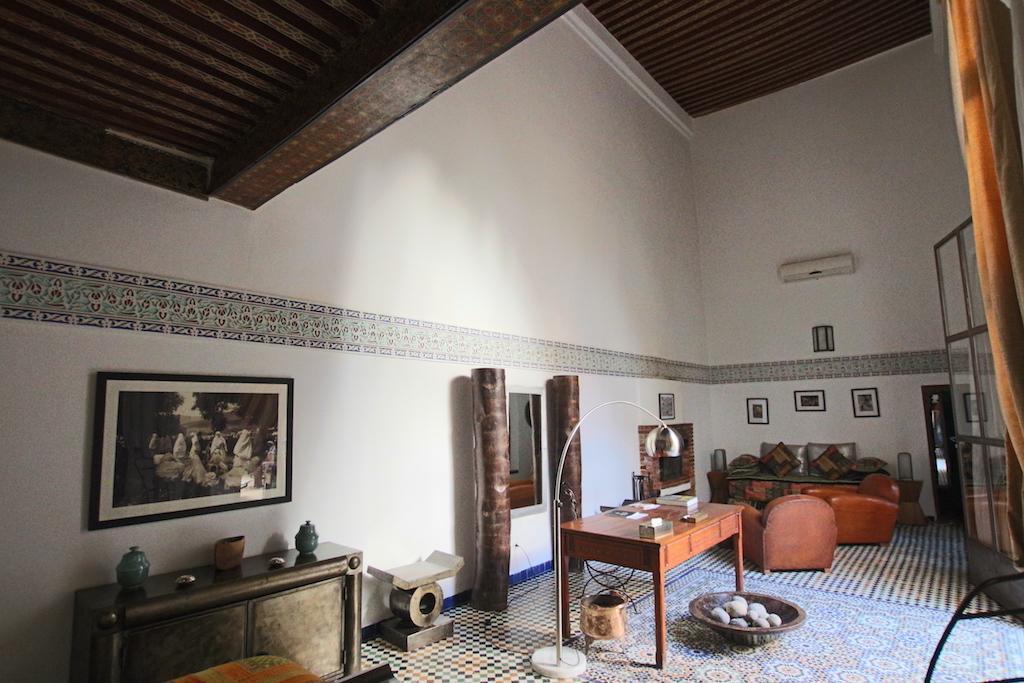 ST: What is that makes Fes unique ?
F: Its authenticity. There are still people living in this medina like they used to for generations. And the community spirit. People greet each other. Take their time. Of course, I’m not going to be a hypocrite. I live in my own cocoon. I’m wealthier than the average man and it’s easy for me to approach people, but nevertheless I love being part of it all. The modern world hasn’t quite crept in yet. 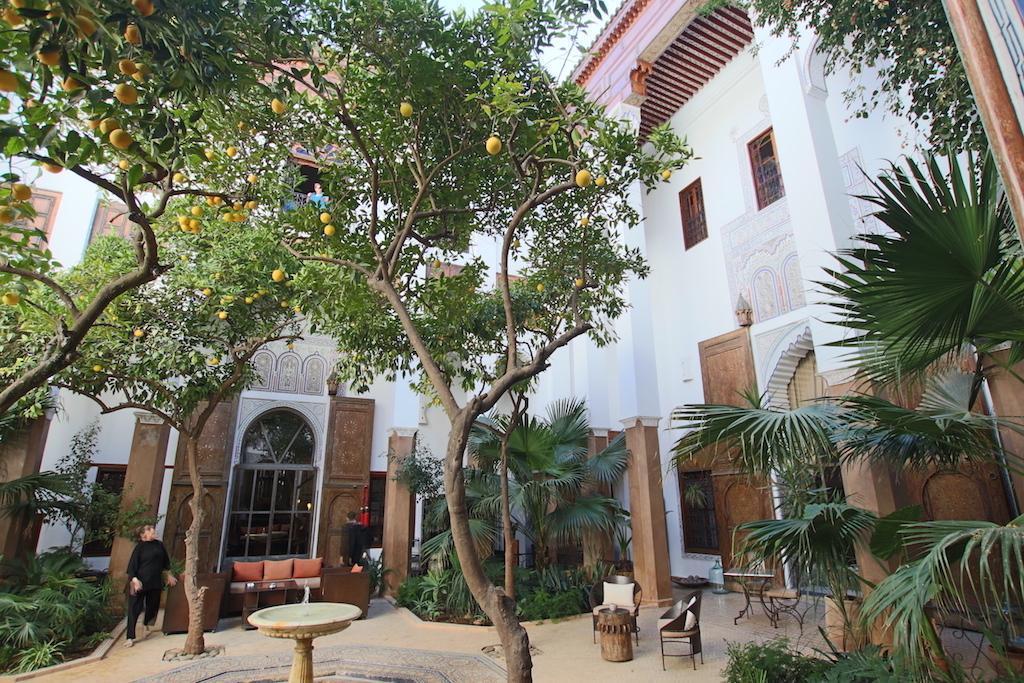 ST: Well yes, if you compare it to Marrakech where it’s harder and harder to find a community spirit inside the medina, in Fes this balance hasn’t yet been tipped over, even if many foreigners own a house here.
F: I agree.

ST: Especially more nowadays when the flag of sustainability is often waved, Fes is an example of how foreign investment doesn’t necessarily have to involve a bastardization of local culture.
F: Everybody in the medina is happy that their business is thriving -there’s no denying it, but what’s more important is that its authentic way of life endures. I am originally from those beautiful villages south of France. They are magnificent, yet uninhabited. So, where is the soul of things ? I’m not making any judgement. But what’s important for me is that my children can play in the street. That I can greet my barber. Chit-chat to the newspaper man. I feel part of a community. Surrounded. 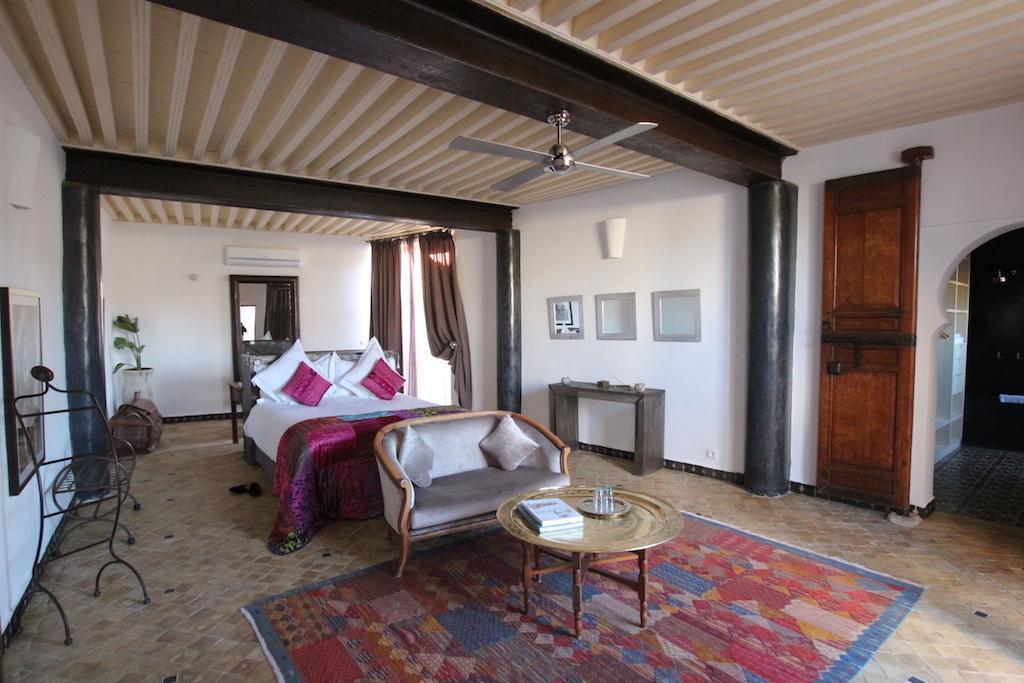 ST: I agree, it’s the same when I travel to Granada, my favorite city in Europe. The old town there, with its carmens, which are very similar to riads in Morocco, is a big open air museum. Yet, there are no children in the streets taking the bread to the local oven early in the morning.
F: Or the lady of the house picking up the bread in the afternoon. And if it’s not her son fetching the bread, the neighbor will. And the oven master will know whose bread it is by the motifs on the towel. This is something that touches me. And it reassures me.

ST: What’s there to do in the surroundings of Fes ?
F: The two day trips that are ubiquitous are: 1) Meknes and Volubilis. The Roman ruins of Volubilis are from second century and standing them on the hill overlooking, one can only wonder of how all had been invented already back then. Meknes is worth for its monuments, especially the Royal granaries where 2000 horses used to be kept. 2) Middle Atlas and the cedar forests. It’s a pity that there are no trekking routes signposted, because this is a trekker paradise. And I know so because I am one. Something that’s not so developed in Fes, is to trek or bike just beneath Mont Zalagh. A trek there with a picnic would be a great way to spend half a day. 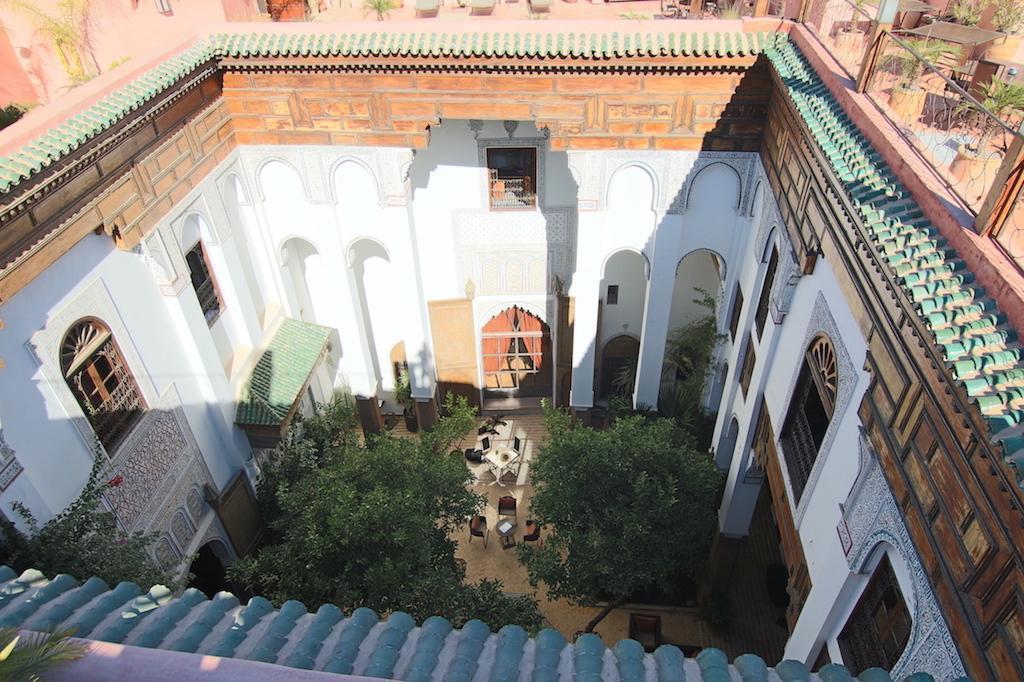 ST: It’s funny you should say that because we are seriously considering hooking up mountain bikes on our 4×4’s so guests can use them whenever they feel like it throughout their bespoke trip around Morocco.
F: That’s a great idea.

ST: With 4 children, how do you manage to find that balance between the guest house and a family life ?
F: What it was clear for me from the beginning was that we wanted our staff to be autonomous. It’s not in my character to wish to control everyone and do regular checks. There have been deceptions, and there should be, but we’ve started over. We’ve tried harder. And I think that nowadays we can afford to not be present most of the time. There’s Thierry, my brother in law, and Raja, our manager that deal with front office and back office operations. Which allows us to not be sucked in by the day- to- day operations. Except when Cristian from Sun Trails asks us to do a silly interview, for the CNN…

ST: I’m not sure about the CNN… But congratulations on achieving that. I don’t know many hotel owners that can say the same.
F: I changed lifestyle 15 years ago. I was in investment banking, spending my life running between world capitals thinking I was more important than anyone else around me. I wasn’t going to change life and become a slave again to some cash – and – carry. Because you can look at it like that: you cash in from your clients and cash out to your suppliers. But I accept that because of the freedom that comes with our choice of lifestyle, we may be loosing some pennies here and there. I can live with that. 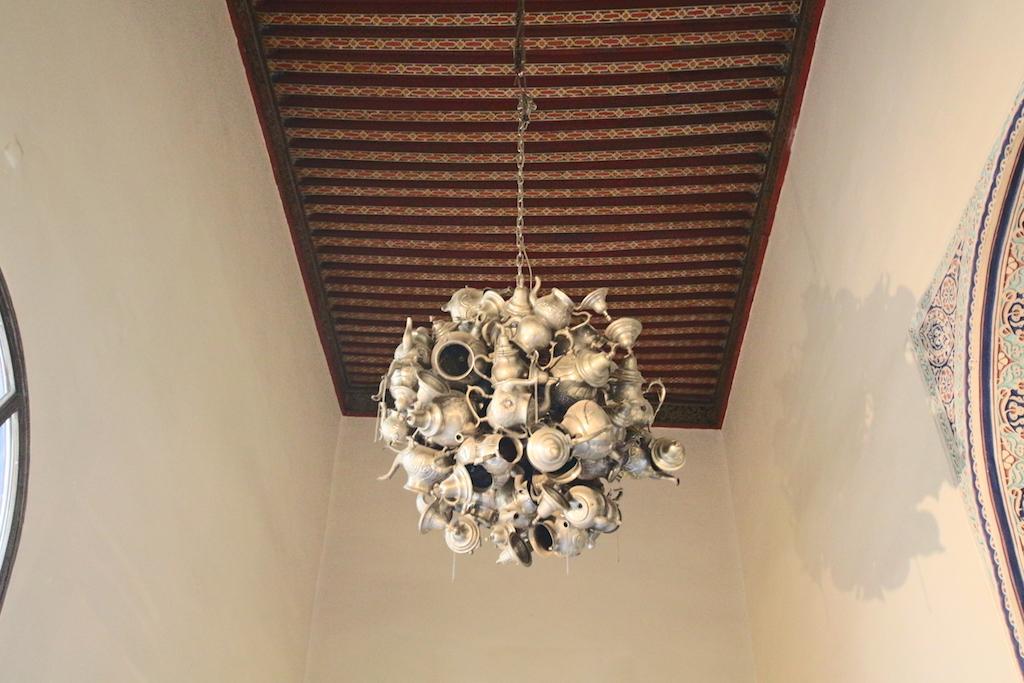 ST: Which brings me to my next question: how come the team here is so solid ?
F: By yielding them autonomy and responsibility. And then I believe we all have a mind of our own, and so anyone can come up with a great idea. They are well paid ( compared to the average pay in Morocco), there are extra bonuses. It costs much less to have employees here than in Europe, there’s no denying. I am ashamed that some French people can come here, open a business, pay a minimal Moroccan wage to his employees and then complain that his expectations are not met. I am profoundly revolted. When your employee is sick, you have an obligation to look after him or her. So, naturally, the staff feels looked after and so they stay loyal. We took our staff on holidays to Paris. To Instanbul.

ST: What makes Riad Laaroussa unique ? Besides its 7 meter ceiling rooms, great decorations, stunning views and delicious cuisine. I meet most of the guests on our private tour of Morocco and ask them for feedback. This is our guests’ favorite.
F: So what do they say ? Why is it so ? 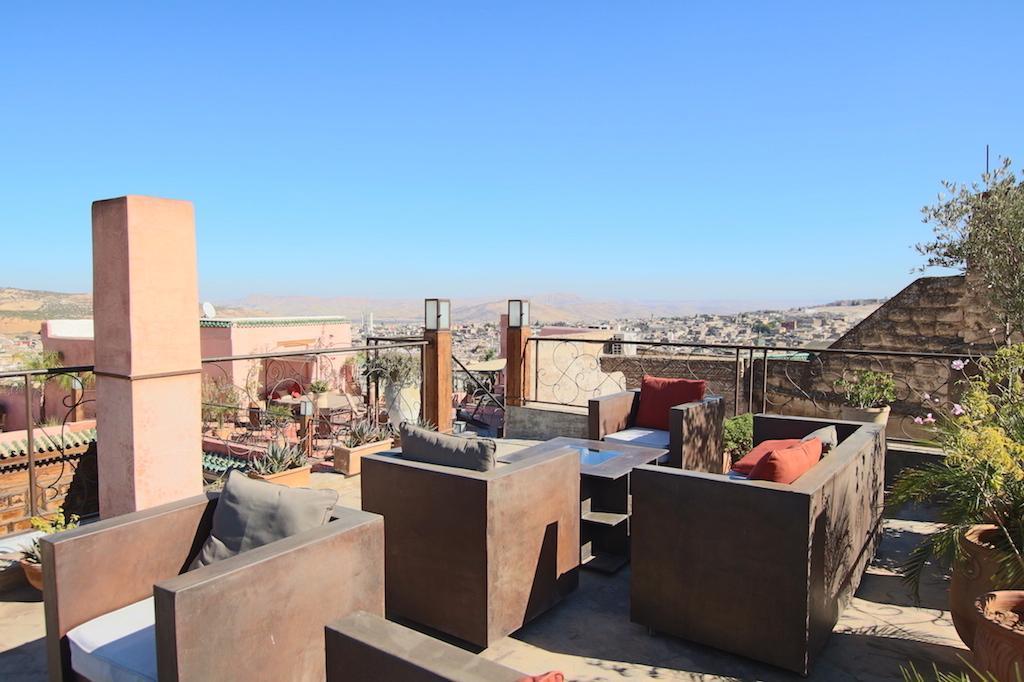 ST: Service.
F: That’s right. Just like I said. When you take care of your staff, you get so much in return. Look at Badia. Here she found a place. No one casts judgments at Riad Laaroussa. Because she’s a woman. Or because she’s poor. And it is because she feels loved that she is able to express herself. And that built her self- confidence. And, in the process, she taught herself English, among other things.

ST: What are the latest trends in terms of tourism in Fes ?
F: The Chinese, of course. We don’t get many of them, as they come in groups. We always get a lot of English speaking clientele and I think that reflects Fes as a whole. I have the impression that more English speaking people visit Fes than Marrakech.

ST: As a percentage, I would agree. What are your plans for the future ?
F: Be happy. Who cares about the rest ?.. No, joke apart, we are looking into perhaps expanding the Riad and accommodate a few more rooms. We may be romantics, but I hate saying no to room enquiries. Maybe the spa also, expand it. The cuisine, we’d like to be able to propose something different if guests had too many tagines. 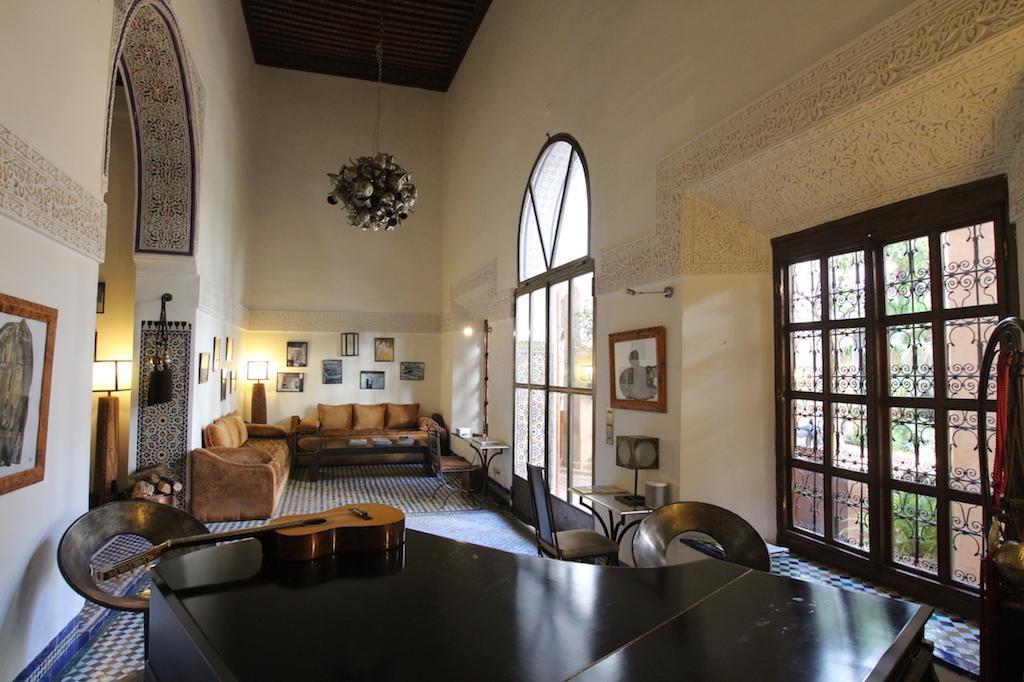 Accommodation at Riad Laaroussa is currently being offered on our bespoke tours of Morocco with our Privilege range.

© Sun Trails 2019. All rights reserved. No part of this interview may be reproduced, distributed, or transmitted in any form, including photocopying, recording, or other electronic or mechanical methods, without the prior written permission of the publisher.