” He deems the Wild the sweetest of friends, and travels on where travels above him the Mother of all the clustered stars”

It is early afternoon, under this tree, a fig tree pitched here on the bank of this wide sandy river bed, dry – how many centuries, (millennia ?) no water had surfaced ?, the valley commanded by dozens of thousand- foot high vertical Sphynxes of cragged polished limestone, burnished by winds and strewn with cavities, some of them convenient shelters for shepherds and their herds when weather turns mean, others most certainly filled with gauche scribblings their candid ancestors scrawled. The day is still young. A golden tinge blankets the bluffs. 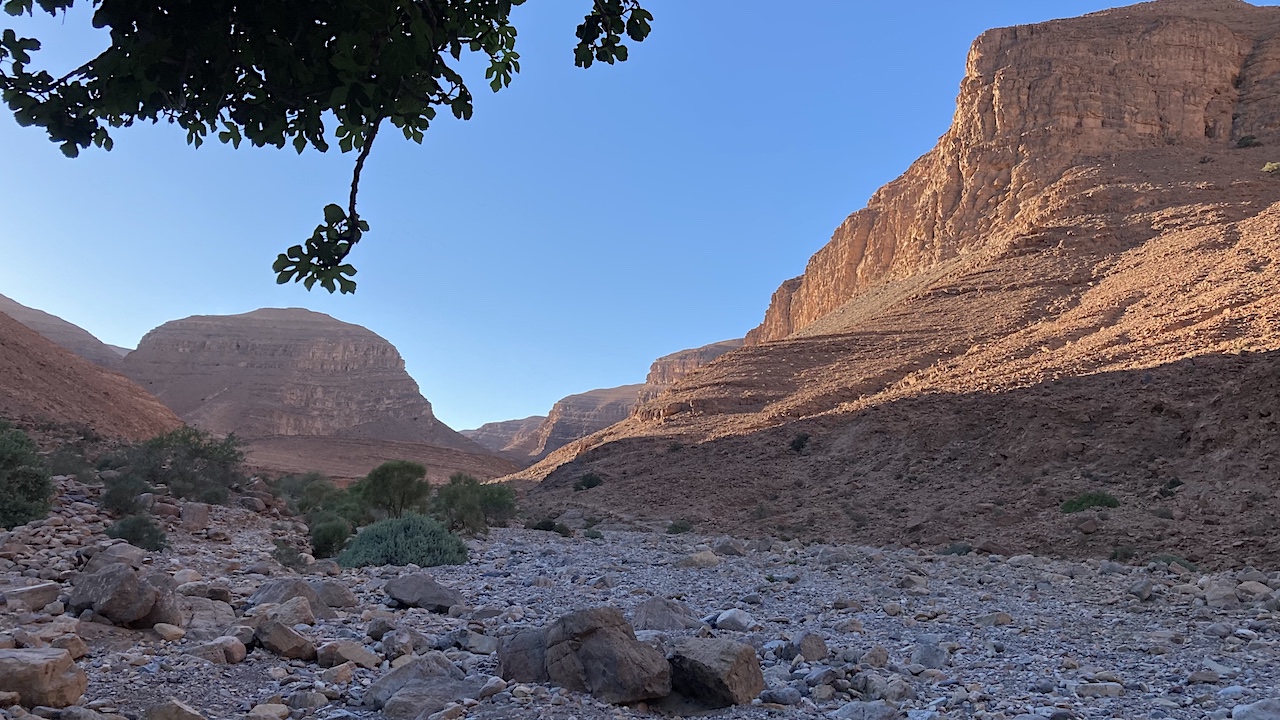 A few hundred yards upriver a stone hovel graces the traveler, neatly patched and wind proof against the intermittent gusts – I had withstood their wuthering myself one quaint night, last spring. Today is not that windy: the fig and its shade lured me in its bower and, save the morning canter up to the pass, the only spot for a dose of 4G connection, a day of unwinding is currently unfolding. Or so is the plan.

Since I left Smougen, the hamlet on the other side of the mountains, yesterday, the only beings crossed my paths were a gazelle and a camel, munching on the crown of an argan tree, no owner in site – no humans. Yesterday brought a lucky find – rain water having filled some flinty hollows, thus procuring me the strictly necessary for a camping a- la- belle- etoile. After a night sleep under millions of stars in a rocky river bed hardly 20 feet wide, luck was not going to last forever and thus, after breakfast, I made to the well. 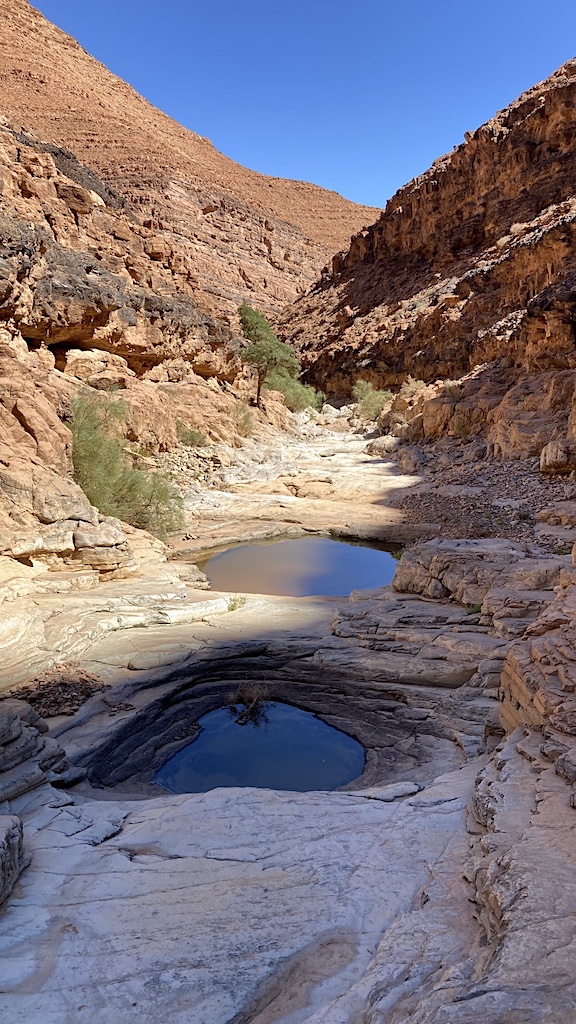 When the breeze is not blowing, the silence feels overwhelming, unbearable, unfamiliar. As the shades stretch and the breeze picks up, only a cheeky magpie keeps me company. If someone wished to hide a treasure, one could hardly think of a more appropriate place. And why not ? After all, the caravans laden with gold and slaves from beyond the ocean of sand, would make their way up to the courts of Marrakech or Fes, on routes not far from here. After all, Akka… I digress.

A mere 24 hours earlier, a 1982 deep blue- ish Mercedes Cobra Combi was screeching, puffing and twisting up the bends that banked the pass of Tizi Amanouz, leaving behind Tafraoute and its drizzle and cold. Some of the hair pin curbs requested the venerable Teutonic vehicle and its driver to engage first gear. On board, Mohamed, an octagerian, his second wife and the undersigned ( quietly pondering over the point of having a seat belt secured at all), engaged in a half witty and half lost-in-translation conversation with subjects ranging from the name of the sites passing by, a house to be sold ( very good location – next to the road ! ( sic) and the worryingly increasing price of gasoline. Well, if nothing else: the proof to universal and trans- cultural values… As I assisted Mohammed to figure out the deleted digits on his mobile phone, in between gear shifts, we finally managed to get through the bends, my phone number recorded and reached the fork where I ejected myself from the less than safe contraption. 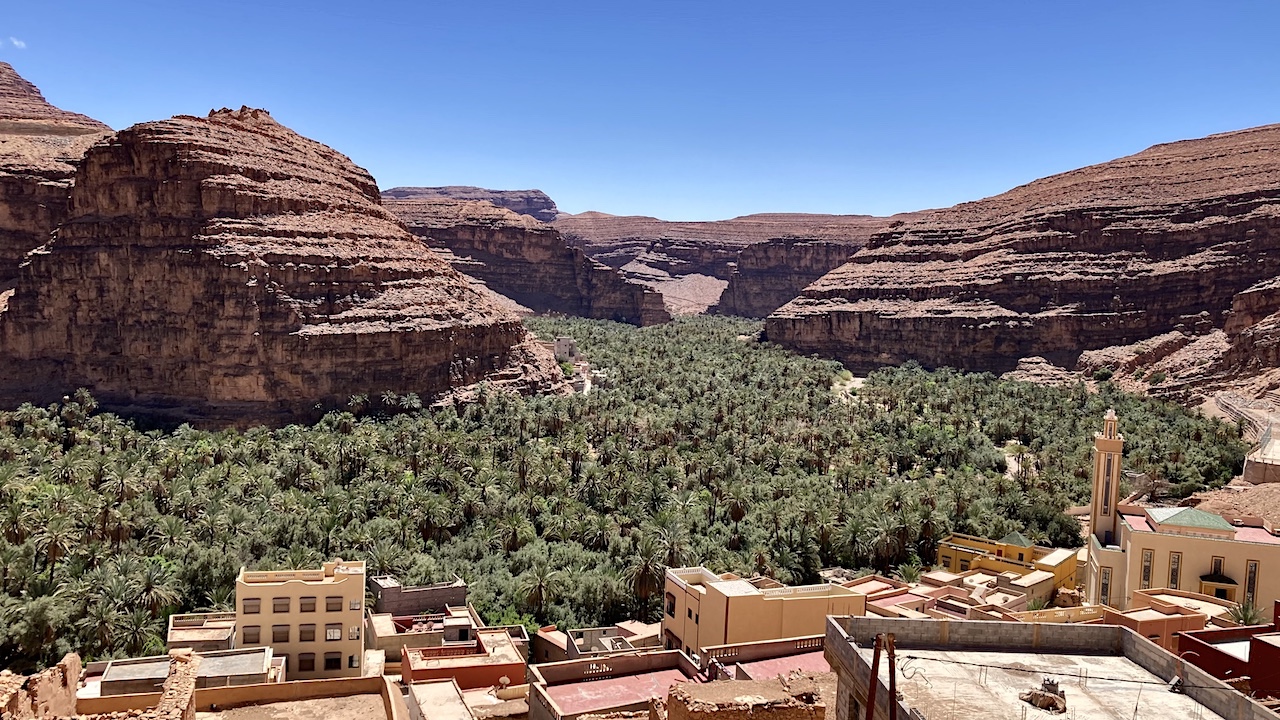 My second hitch hike for the morning was certainly more recent and I could have attested to the conveniences of such, should I have occupied a seat. All seats being occupied, I was relegated to the trunk. After all it’s the destination that matters, not the way there, right ? Not so long later I was in the tranquil hamlet of Smougen, having tea with Hussein, the village sheikh, a former acquaintance of mine, in his lounge, in the middle of renovation works, among heaps of cement bags, both brands equally enticing: ‘Choix Economique’ and ‘Ciment Gazelle’. One glass of tea turned two and three and I was getting the itch. You guessed it, it was FRIDAY AFTERNOON. 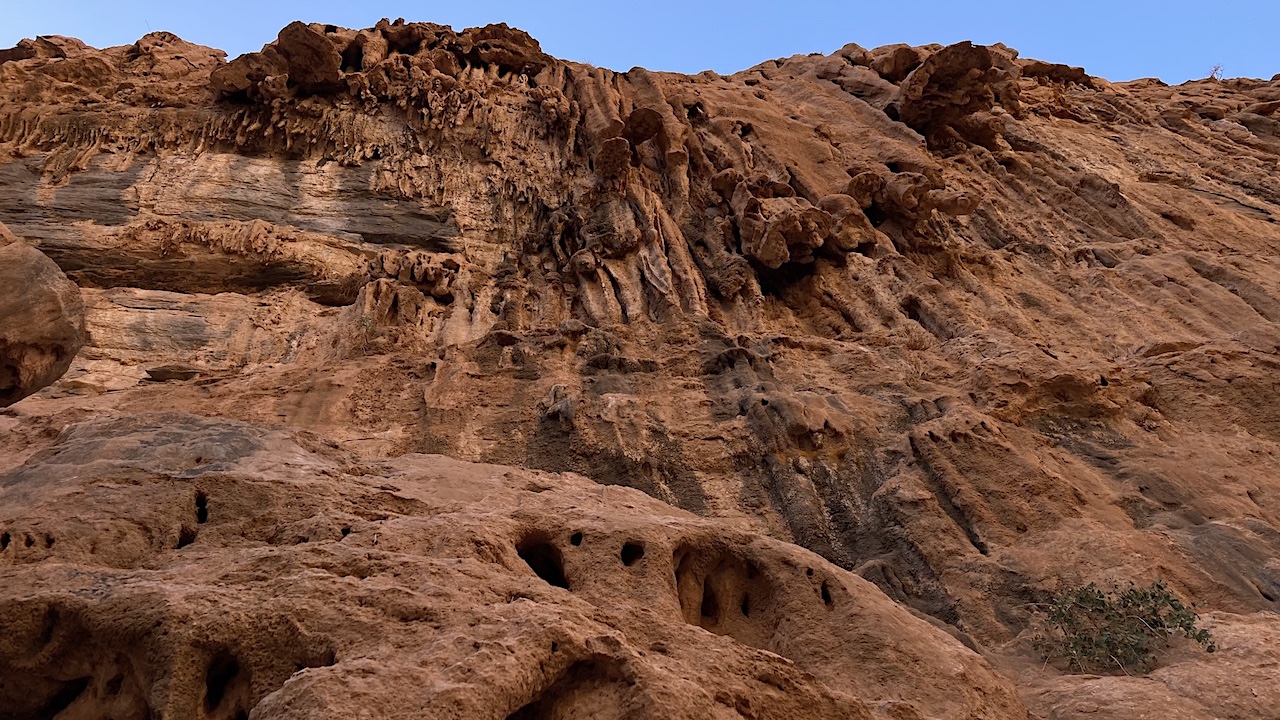 So when the trap was set, I was ready: I excused myself firmly yet politely from a couscous knoll that would have otherwise curtailed all likelihood of getting myself up the 1000 feet that separated me from the first brow of the range. Formalities concluded, I was finally able to take up the slope through the crannies and nooks of the old village and get my pulse up to speed, stopping for the panorama up there on the top of the mesa. The strain on my shoulders was somewhat compensated by the constant reassurance that I should be fine for a week, should I lose my way or break a leg – after all, I was looking forward to a little bit of remoteness. 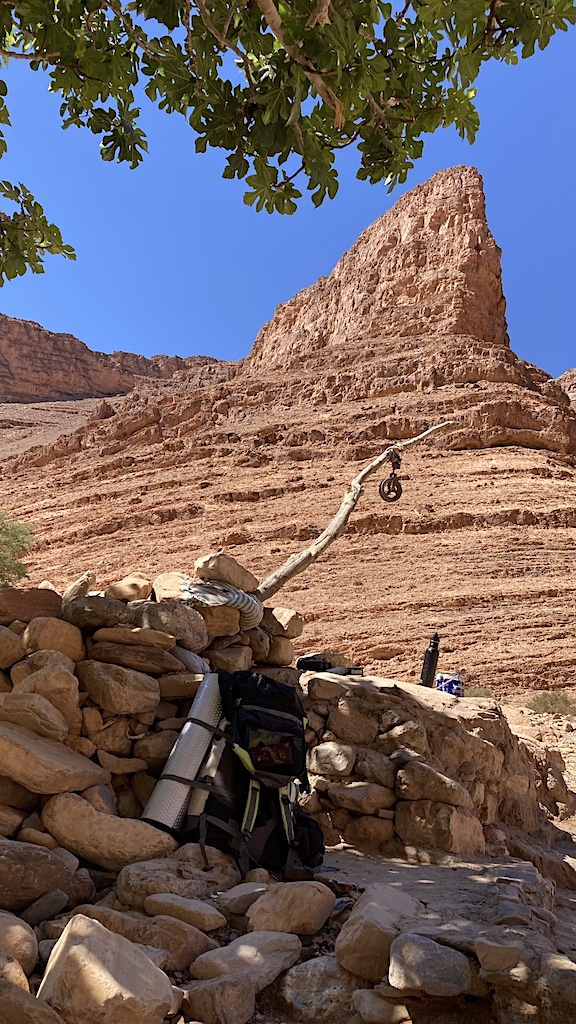 The fig, the well and the giant

Presently, the two rows of giants lining the deep gorge stand out like two opposing armies facing each other. A falcon sprouts from the between the bluff walls, in the distance, august, stately, appearing not bothered to flap once, floating effortlessly upon the air, vanishing just as stealthily. It’s morning and I ventured up on one of the banks of the canyon, to catch a better view at the myriad of caves dug out ( man -assisted ? naturally ? ) within the sheer precipices further up. The higher half of the range is already crimsoned by the ascending sun with its glow, and the still air foretells heat – a hot day ahead. 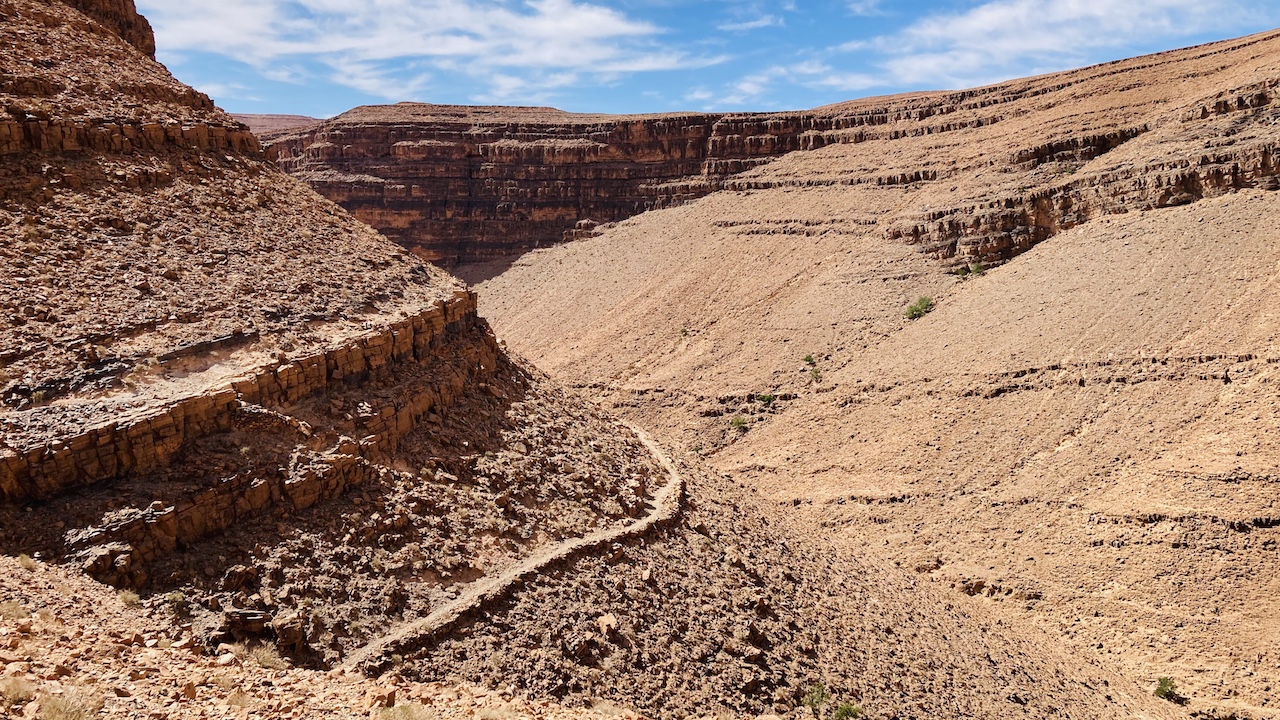 The trail at its most visible and softest

Breakfast concluded, back pack ready, I set out towards west, right into the gorges, divining the trail as I advance, the ravine bending its way, the sun relentless. A shepherd boy and his father cross my route – I’m on the right track, they say. Natural pools of crystal clear water ? Where one can drink thereof ? How can that be the within walking distance from this barren kingdom of calcified, tawny rock, the only stain of green, the accidental argan tree ? And yet, that’s my destination for the afternoon. But wait ! Ahead of me I glance specks moving in the distance.

Setting up for mint tea

The gruelling ascent is colored by catching up with the yester shepherds and their 800 or so goat herd, right after coming out of the gorges onto a rubble plateau. For a while I walk behind the oldest of them, his rubber sandals occasionally flicking away a stone from the barely visible track. We come across a family of stray camels. They stop after noon and in a few minutes a fire is cropped up and tea is brewing. After two glasses of tea, I’m headed west as they head north, with the firm instruction that I should follow the oued and not stray once. For the next couple of hours, I’m plodding along this underground river, its only trace the sandy riverbed overgrown with shrubs, argan trees and reeds, crossing occasionally cairns and stone hovels.

All of a sudden, a change of scenery takes place – how familiar this feels… I can feel it in my gut that the natural pools, the gueltas, are just round the next bend. And then they happen. Not just see- through sweet water pure enough to drink, but tinged with shades of green moss and sky blue, the breeze pulling a minute swell on the surface, divine. The urge of diving right in, clothes- on. For the next hour or so, pool after pool succeed each other, each one more alluring than the previous, until I reach a wide opening where the sheer scarp on the bank of the canyon is broken in layers of rock formations, like rows of sarcophagi. Or just my imagination drifting… Like I said: it’s hot. At the plinth, a natural stoop buttresses the wall, a stone table and seats laid out in front of caves dug in. After a hefty dinner and a camp fire that feels like a pageant, I linger on to watch the stars reflected in the pool below while throughout the night an orchestra of frogs weaves a constant cacophony. 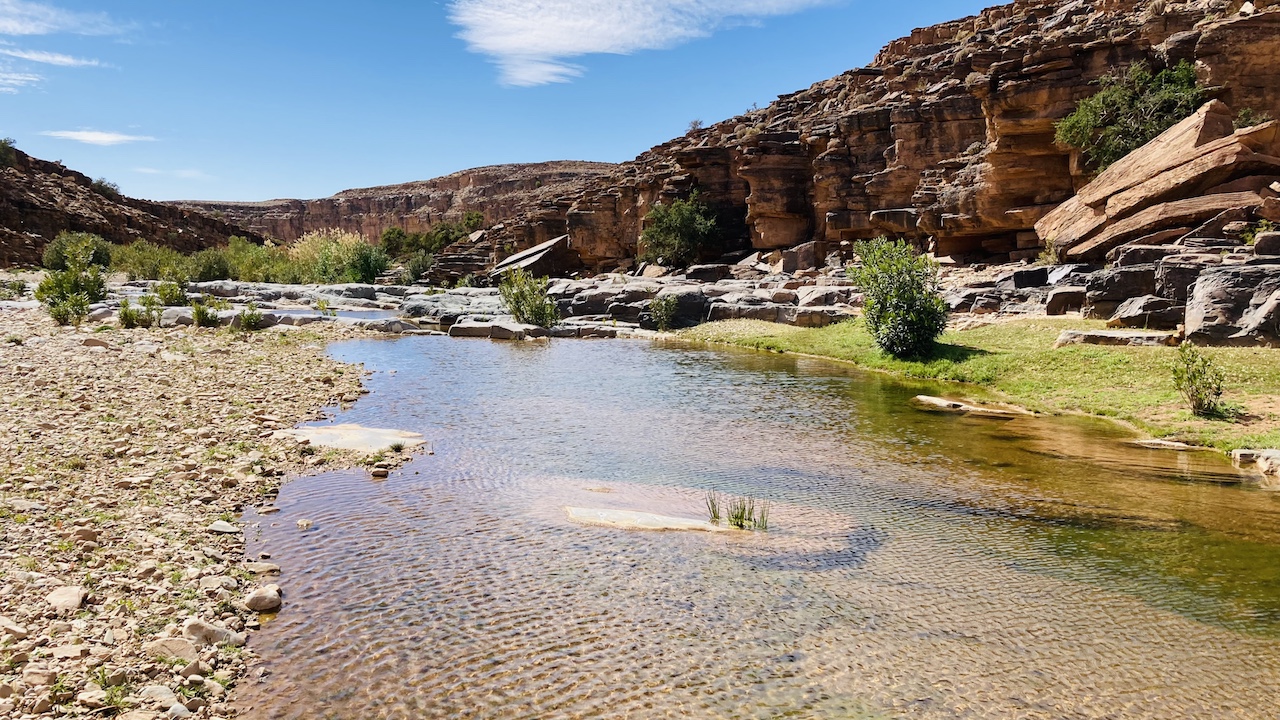 What gave shape to these rocks ? Why did the source surface here of all places ? Inside the cave, snuggled in my sleeping bag, I fall into sleep’s thrall, questions unanswered. Dawn sets among a hazy sky: the amphibians are silent now. The track this morning follows for a few hours over a monotonous plateau, the serrated crest on the horizon my main reference, to finally conclude with a descent into sublime gorges. The union of ash- shaded cliffs within the gully shrinking, palms, reeds and shrubs and natural pools where small fish swarmed was beguiling to eyes and feet sated with hours and days of stone deserts. 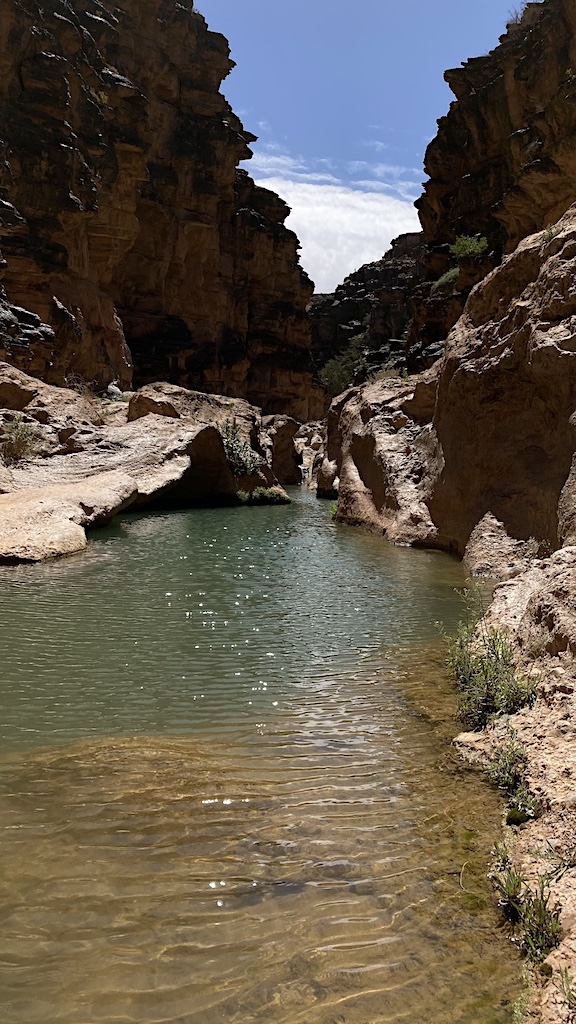 Yes, you can dive in

Under the lofty argan tree shading a natural glade, Rachid, my local guide cobbles up a picnic salad crowned by endless rounds of mint and absinth tea. There are 4 of us now and it feels like a crowd. We slumber for a while beyond the rocks swayed by the stream’s gurgling. Later, we descend upon the village, past walls where lava has frozen in time like candle wax, piles of scree and through the palms swaying insouciantly in the breeze, under the bluff bracing the century old granary commanding the rift. Then, a house. A room, a bed, a table, a shower: and I’m delivered back to the world. Or at least convenience. 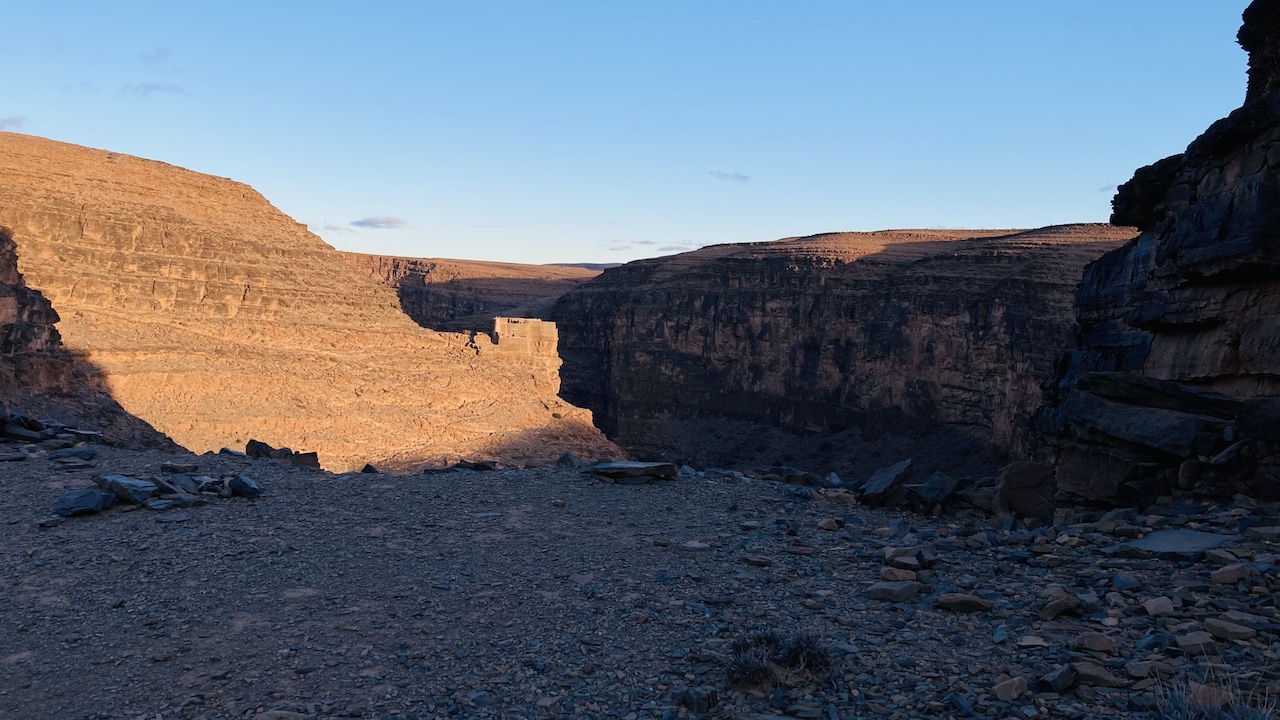 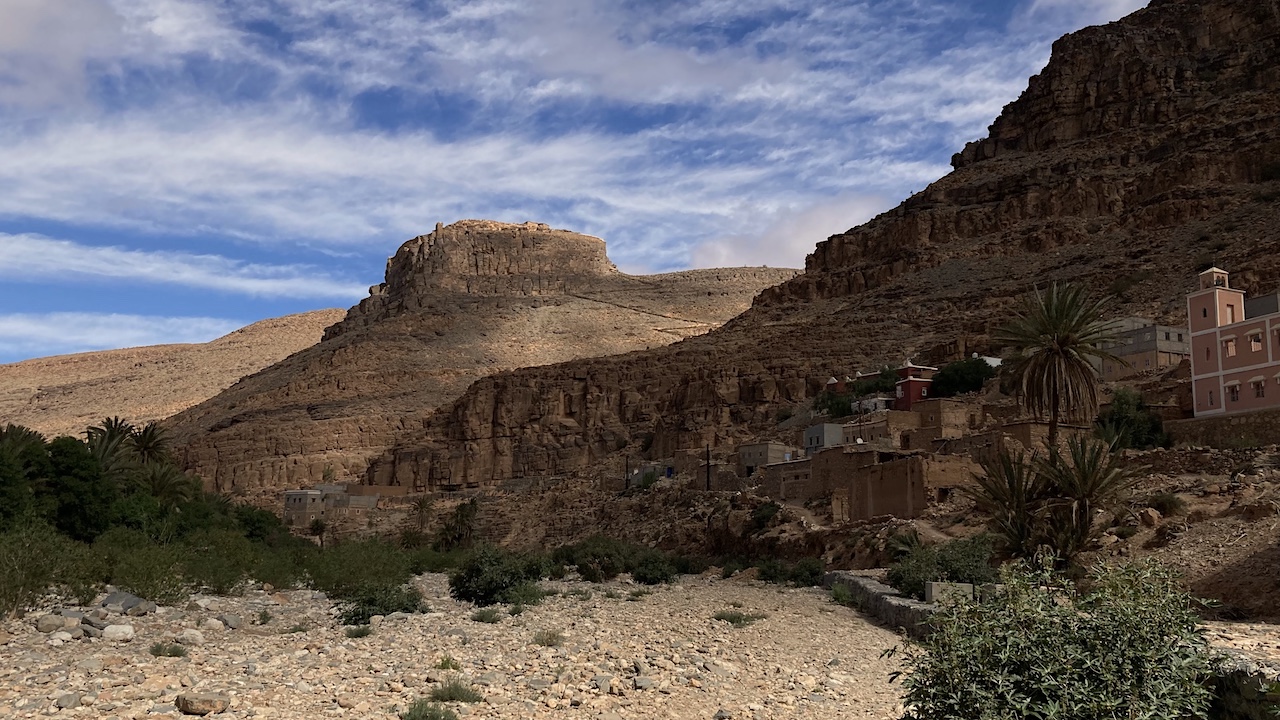 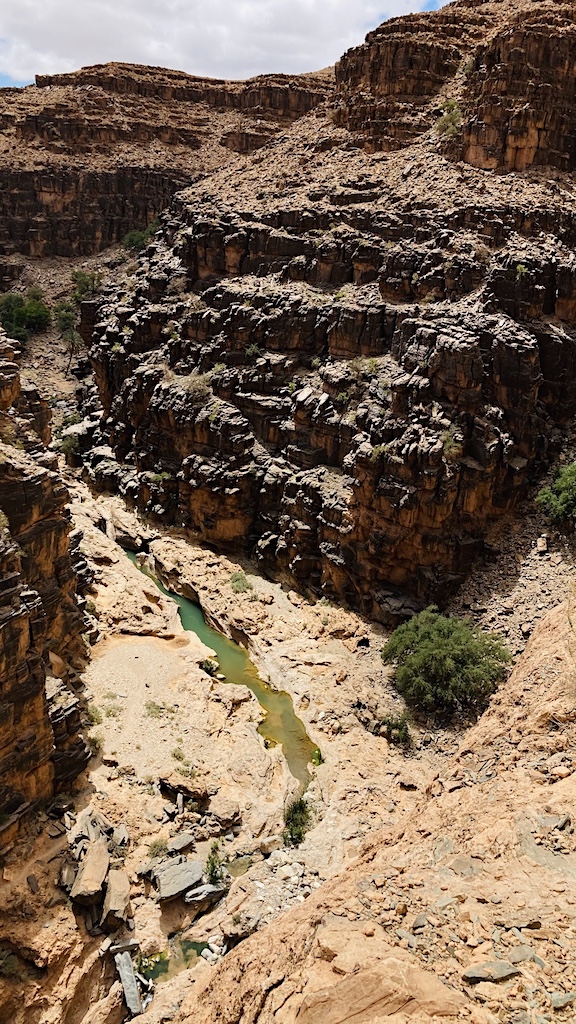 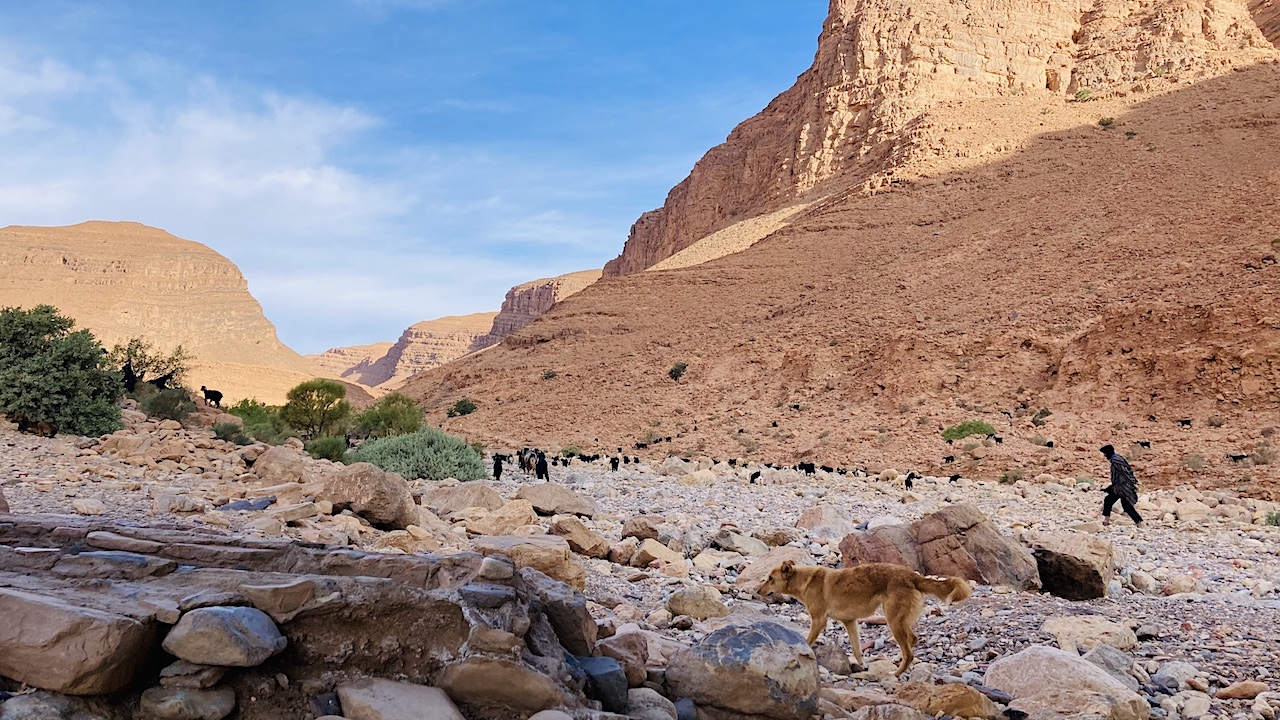 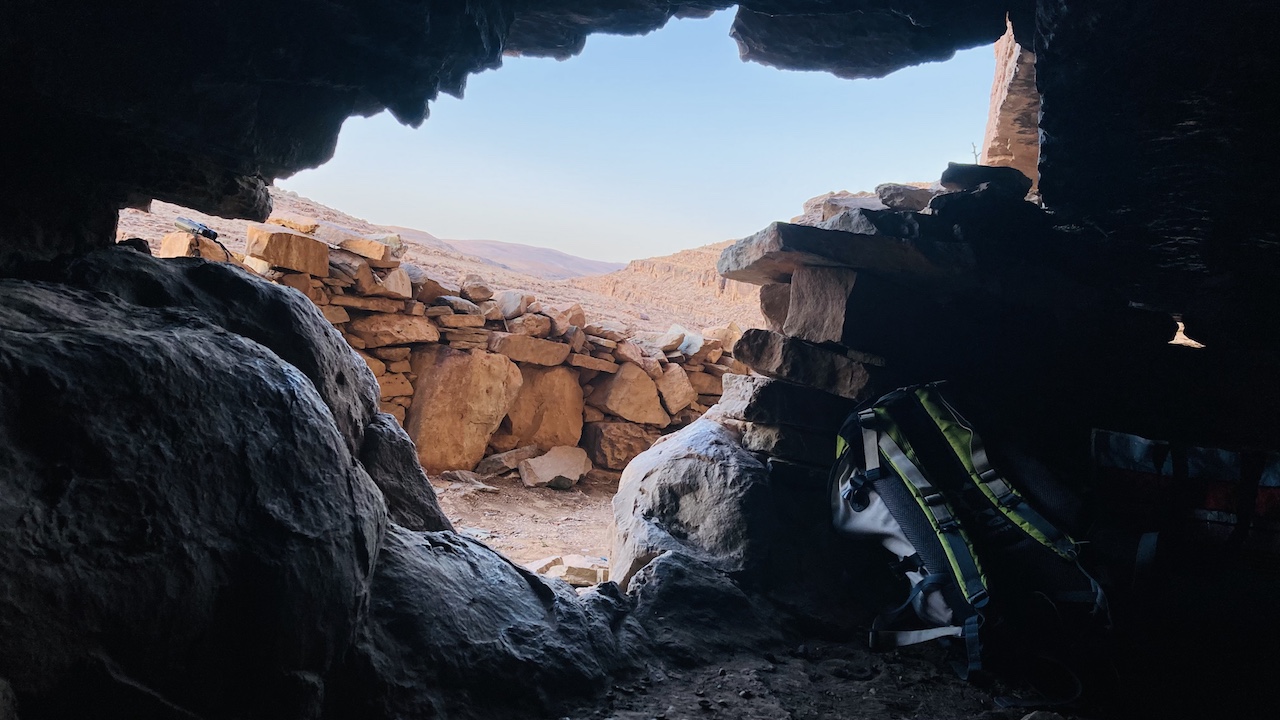 PrevPreviousDar Ahlam – the house of dreams
NextTravel to Morocco 2022- is it safe ?Next