A 3 day private tour from Marrakech over the High Atlas to Sahara desert and back. 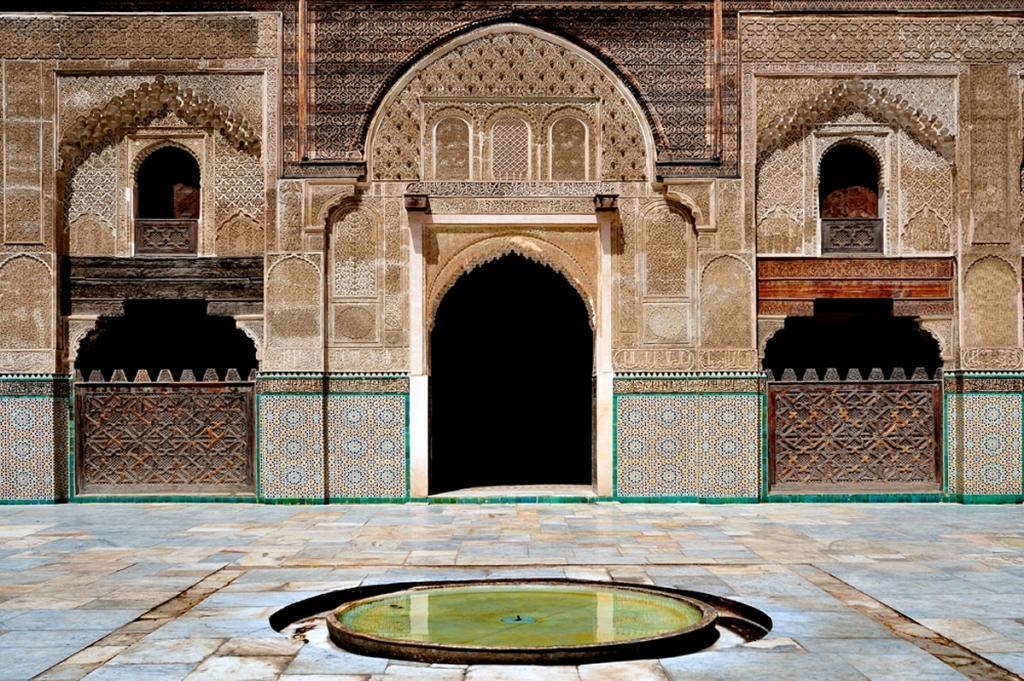 Our itinerary crosses the High Atlas at 2300 meters high, visits UNESCO world site Ait Benhaddou, the Kasbahs of the south, the Biblical adobe villages, serpents along mythical Draa Valley, stops by the oasis, walks through the palmgroves, deciphers century old Qoran's and Arab treaties, bakes emerald pottery at Tamegroute, uncovers honey- combed ksours, rides a camel into the Sahara, sleeps in the desert under the starriest sky, awes at the extravagant Pasha's residence - all highlights of a bespoke trip of Morocco.

You may choose to follow the original tour itinerary as described on the website or have us create a tailor made itinerary around your preferences. Please note that all our tours of Morocco are private and daily stops are accommodated along the way every couple of hours for you to visit a site, take a stunning photo or stretch your legs.

Feel free to let us know if you would like to include a site/ activity of your own in the itinerary. If you don't know where to start some ideas are:

Below you will find our rates based on two persons travelling together, with the relevant accommodation option:

Our portfolio accommodations do not fit into a rigorous star rating system, so we have named them Dreamers, Privilege and Divine, to best resume their nature. To ensure availability, we recommend booking at least 3-4 months in advance.

Pricing is tentative and can vary slightly at different times of the year. If you book your tour to take place in December, January ( outside end of the year holidays), February, July and August, you will be charged our low season rates. We can only quote an exact rate once we have agreed on the precise itinerary, accommodation option preferred, the extras you would like to include and the duration of the journey. Discounts apply when 3 or more persons share the vehicle(s). You can also choose to mix different accommodation ranges within the same circuit.

- private use of the English fluent driver- guide & modern air- conditioned Toyota 4x4;
- boutique/ luxury hotel accommodation for 1 night;
- Sahara camel trek and private double tent for 1 night;
- 2 three- course- meal dinners and 2 breakfasts for 2 persons;
- airport or hotel pick- up and drop- off;
- private visit of the palm grove with local guide;
- refreshing drinks inside the vehicle all along the itinerary;
- local English speaking guides;
- admission fees to all local sites and attractions;
- 24 hour travel assistance ( with Privilege and Divine accommodation);
- gasoline and transport insurance;
- VAT and visitors tax.

If you can add an extra day to the itinerary, you could thus avoid the long drive to Marrakech on the third day. If you can add two extra days ( 5 in total), our Caravans Dust tour continues on to Taroudant and the Atlantic coast before returning to Marrakech.

WHY SHOULD YOU BOOK WITH US

# We are based in Morocco since 2006 and no, we don’t work from home :). We scout for the most unique sites & local experiences all year round. We present these on our blog, Facebook and Instagram  pages. And only a travel agent based in Morocco can keep you up to date with latest travel restrictions within Morocco or how to get the fastest PCR test;

# We strive to bring you most authentic experiences. Some of them are unique: private flight to the Sahara; visit of a medina with a local university teacher; mechoui with a nomad family;

# 1 percent of our receipts go towards local projects, like help educate girls from rural Morocco or restoring the agadirs of southern Morocco;

# we accept payments by credit card, PayPal, bank transfer and, in the near future, alternative coins;

Ready to create your unique Morocco tour? Get in touch here with our on- the- ground team in Morocco.

As the private tour of Morocco leaves Marrakech, the distant haze begins to resolve itself into a jagged mountain range - the High Atlas mountains, jutting abruptly from the plain. Our route follows the same one caravans used centuries ago, to bring into Marrakech slaves, gold and precious wood from the other side of the ocean of sand, the Sahara.

[... in the sands of that country is gold, treasure inexpressible. They have much gold and merchants trade with salt for it, taking the salt on camels from the salt mines. They start from a town called Sijilmasa... and travel in the desert as it were upon the sea, having guides to pilot them by the stars or rocks in the desert. ] ( Tohfut-ul- Alaby by anonymous author, 12th century)

Beautiful scenery and small villages built in tiers succeed among oak trees, walnut groves and snow patches as we brave the pass Tizi n Tichka pass at 2260 meters high. Scent of thyme fills the air. We then dwell into back roads, to shortly reach Telouet and former pasha's palace dominating the village, a fortified citadel that is both a microcosm of an empire and its demise. Pacha Glaoui had managed to overshadow the sultan by controlling most of nowadays Morocco and decided to erect a palace in the middle of nowhere, where his family had originated from. He had employed the most skilled artisans to build and decorate his main residence and, in its golden age, armies, stables and Christian slaves were confined within its walls while a flourishing Jewish community was managing the nearby salt mines.

Leaving Telouet behind, our journey crosses spaghetti western backgrounds to then follow the canyon. The gardens by the river bed melt into colourful mosaic and decaying kasbahs stand witnesses of an age soon resolute. Late afternoon. Then it's the right time to visit UNESCO site of Ait Benhaddou, the postcard- like adobe citadel. A fat, red sun, only underlines the beige tones of the mud- and- straw mixture and through the covered passages and stone walls, the past filters itself into the present. You will be offered guidance but the best is to just lose yourselves in its alleyways. There is always a new way to reach its peak, from where the snowcapped Atlas Mountains framed by the denim blue sky will steal your breath away. If the climb up hadn’t already... As we pass through Ouarzazate, we can stop and visit the famous film studios where recently scenes of Game of Thrones were shot.

Soon after leaving Ouarzazate behind, the road climbs, twists and turns its way through dark orange calcified ridges, before breaking through the scarp at the pass of Tizi n'Tinififft and descend onto the lush palmgrove of Agdz. Right after the pass you catch a first glimpse of the valley and the oases, the green swath of palms snaking up into the haze bordered by the Kasbahs, adobe guardians rising as if from the earth where the green gives way to the desert. There is no road sign but somehow you become aware you have entered a different land, Le Grand Sud. Dinner and accommodation in a guest house inside the palm grove.

Draa Valley , with its numerous oases, Biblical villages and kasbahs, used as overnight stops by the caravans until not too long ago is the beginning of the 'caravan highway' connecting for centuries Timbuktu, Gao and the kingdoms of Ghana and Mali to Barbary ( present day Morocco).

[As a result of the conquest of the states of the Sudan, the Sultan of Morocco received so much gold dust that envious men were all troubled. So from then on Al- Mansour only paid his officials in pure metal and in dinars of proper weight. At the gate of his palace 1400 smiths were daily engaged in making pieces of gold. This super abundance of gold earned the sultan the surname Adh - Dhahabi ( the Golden).] ( Al Iffrani- 'History of Saadi dinasty in Morocco', 18th century).

Have a guided tour of the palm grove after breakfast. Then, cross over the palm grove and visit the Black People village, descendants of the Harratin, the black slaves from across the Sahara. Stroll around the eerie kasbah of Tamnougalt to then follow the route along Biblical villages all the way to Zagora. More ancient than Zagora is Amezrou, nearby. The important Jewish community had left behind the silver jewelry craft and the adobe synagogue. Later on, in Tamegroute, visit the library which hosts a fine collection of Qorans printed on gazelle hide and 12th century old works on mathematics, medicine and history. What makes Tamegroute famous though, is the typical green glaze cast inside the local earth ovens. Roof tiles, jars, dishes and pottery produced here are traded in souks from Tangier all the way to Agadir. The last stretch of the day will take us from Zagora to M'hamid, where the tarmac ends. The first dunes, Erg Lihoudi, are only a 30 minutes drive away. For those that want to experience the true desert, the more remote  dunes of Erg Chigaga await in the distance, a 2 hour off- road driving from Mhamid. As you approach the dunes, you will be met by our camel man and trade the 4x4 for camels to arrive at the desert camp by the time the sun dips onto the horizon.

While the staff of the camp unloads your luggage and sets up your dinner, you climb onto the highest dune you can find. And lose yourself. There is nowhere else you would rather be. Have your dinner in front of your private tent, by the camp fire. At night, dazed by the millions of stars glittering above, the silence is so thick you feel you could cut a strip and wear it as a scarf, as you fall asleep.

Should you have missed the sunrise… well, try not to. After toddling across sand dunes, our trip reaches the perfectly flat Lake Iriki, nowadays completely dry, casting the fata morgana mirage... Later on, we will have tea with a family of nomads and search for fossils. Then, we take on the hamada, the much dreaded stony desert, to finally reach Foum Zguid. Farewell Sahara, hello tarmac. Have lunch by the pool at a local lodge or a casual snack in the village. On the way to Taroudant, we pass through Tazenakht, a carpet weaving center and center of Berber carpets trade. Later on, we complete the loop and get back to the route we left behind after visiting Ait Benhaddou on the first day.

We will then start our way back crossing the High Atlas. Few people know it but this road was first laid out by the French Foreign Legion back when Ouarzazate was no more than a French army outpost. The journey serpents its way through the abrupt valleys and mountain peaks and our custom Morocco tour arrives in Marrakech late in the evening. 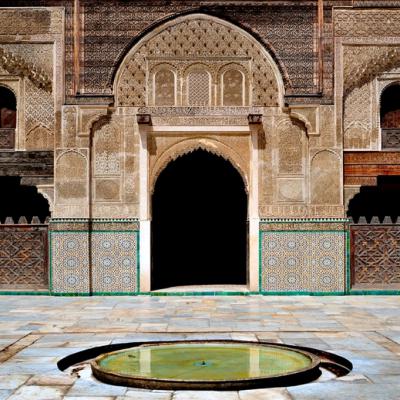 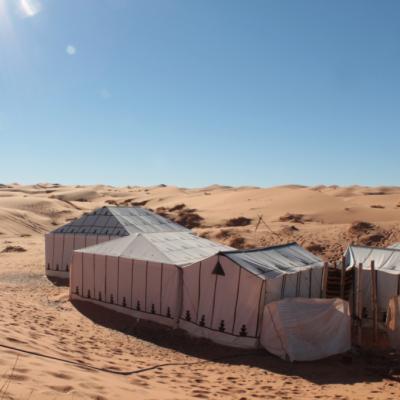 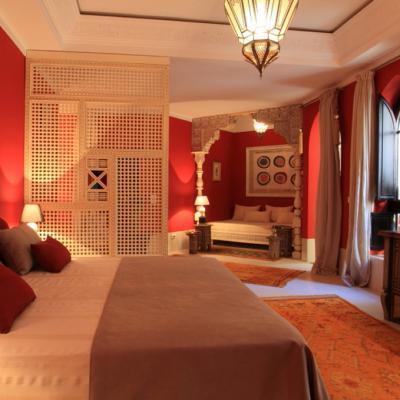 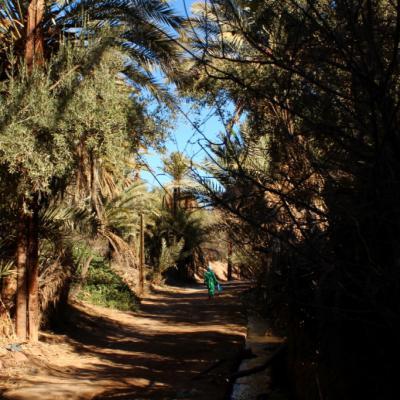 Inside The Palm Grove 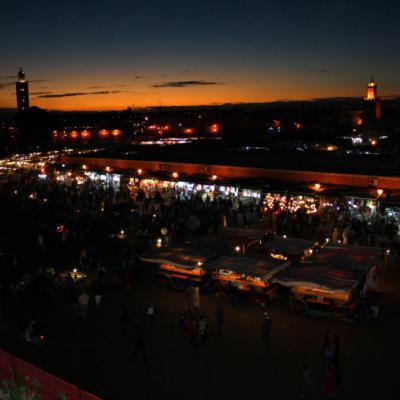 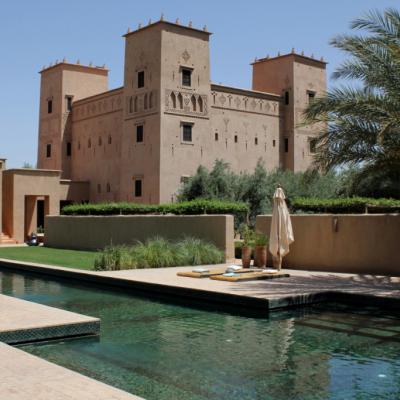 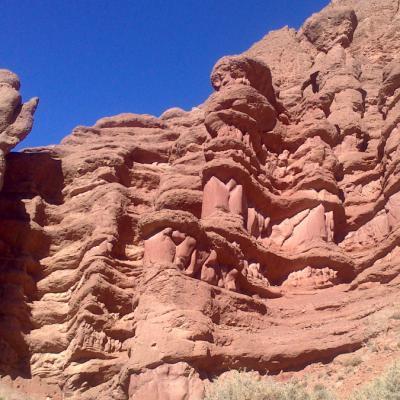 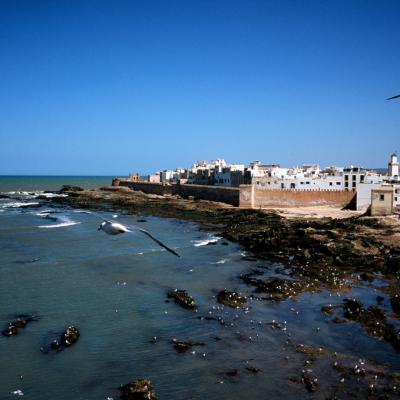 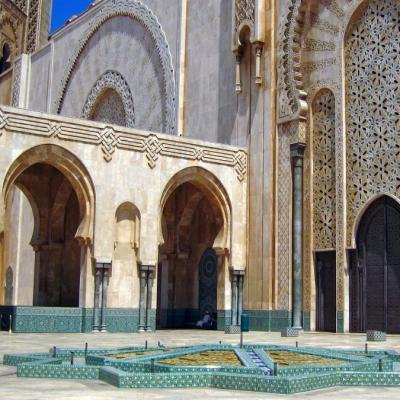 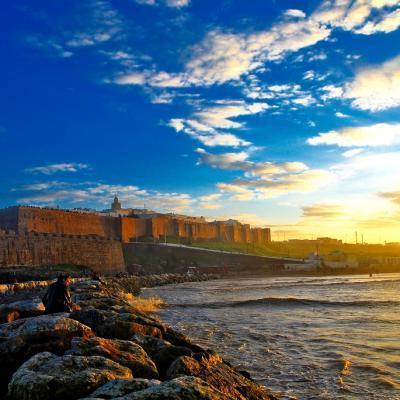 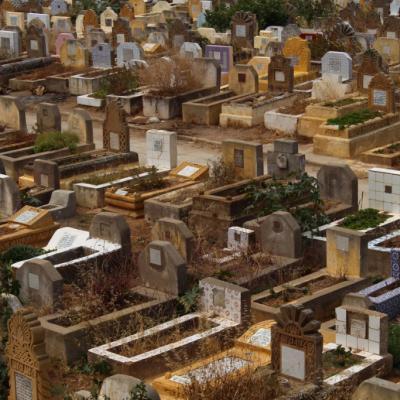 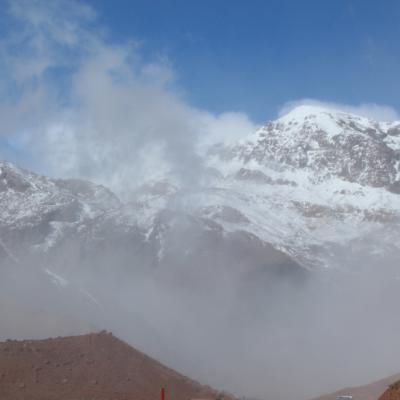 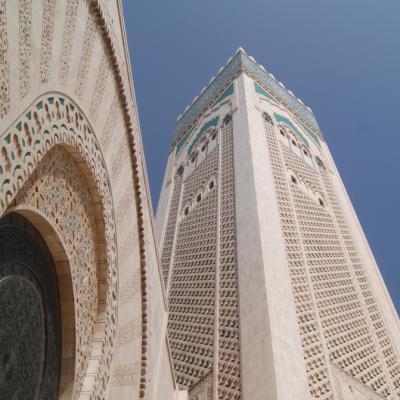